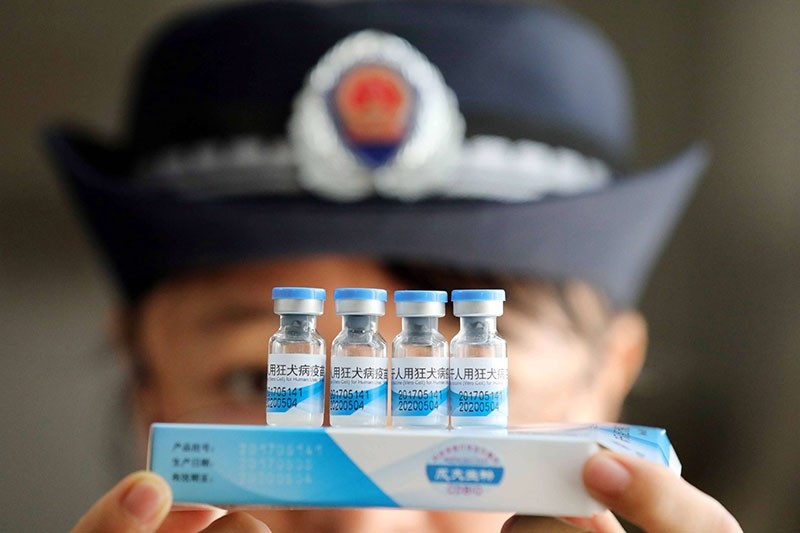 A law enforcement officer from the market supervision and administration bureau checks the vaccine supply in Rongan, China, July 23, 2018. (EPA Photo)
by Compiled from Wire Services
Jul 24, 2018 12:00 am

Chinese police have detained the chairwoman and five other employees of Changchun Changsheng Biotechnology, a company that has provoked a huge public health scare after being accused of providing ineffective vaccines and forging data.

Chairwoman Gao Junfang, three executives and two mid-level managers were taken away by local police who are investigating suspected crimes in Changsheng's production of the rabies vaccine, according to a company filing Tuesday to the Shenzhen stock exchange.

The anti-graft watchdog in Jilin province, where Changsheng is based, said it was probing corruption at the company, which is China's second-largest rabies vaccine producer.

News that pharmaceutical company Changchun had fabricated records and been forced to stop manufacturing rabies vaccines was first reported more than a week ago.

But it exploded on social media over the weekend, fuelled by a viral essay alleging decades of malfeasance by the company including the bribery of officials to allow low-quality products onto the market.

Millions of angry users shared the essay and other information on product-safety problems in a rare public airing of a touchy national issue.

The China Food and Drug Administration (CFDA) said last week the problematic rabies vaccine had not left Changsheng's factory, but the company admitted it had shipped a separate sub-standard vaccine.

A few days later, regulators announced penalties resulting from a separate November 2017 investigation into the pharma company over a substandard diphtheria, tetanus and pertussis vaccine, known as the DtAP vaccine, state media reported.

However, the company revealed that it sold 250,000 doses to Shandong province last year.

Changsheng's stocks have lost more than half their value since the scandal broke, provoking outrage online and leading to calls for stronger regulation and greater criminal liability for vaccine companies.

Chinese President Xi Jinping on Monday called for further investigation into Changsheng, saying the reports about the faulty vaccines were "terrible and shocking."

The vaccine scandal is the latest of its kind in China, where problems with quality control and counterfeit products persist across industries from powdered milk to electronics.

As the pressure mounted, further revelations have emerged. Authorities in the northern province of Hebei announced Monday that nearly 150,000 people had received sub-standard DPT vaccines made by another firm, Wuhan Institute of Biological Products.

The problems have rekindled already deep fears over domestically made medicines and driven worried parents online to swap information on obtaining imported vaccines.

"I don't trust the vaccines here anymore," a woman who gave only her surname Zhou told AFP as she waited with her young daughter at a pediatric clinic in Beijing on Tuesday.

Zhou said she was willing to pay for imported products rather than accept those offered for free by the government.

Hong Kong clinics said they have seen a surge in demand for children's vaccines.

One reason product safety is such an explosive issue in China is that children have been among the victims of the worst scandals of the last decade, including a massive 2008 scandal over milk and baby formula tainted by the chemical melamine, which gives the appearance of higher protein levels.

"This time, it deals with babies, and the volume is a lot. That's why people are concerned with it," said Scarlett Pong, president of the Pharmaceutical Society of Hong Kong, where wealthier Chinese parents often travel to access foreign medicines.

Experts say Chinese authorities are gradually improving supervision, but the country's vastness and lack of openness means it will remain a long-term battle.

"I think whoever comes up to be the political leader in the future, they will have to fulfil the demands from the public. The world is much more open now, citizens know a lot of things," Pong said.