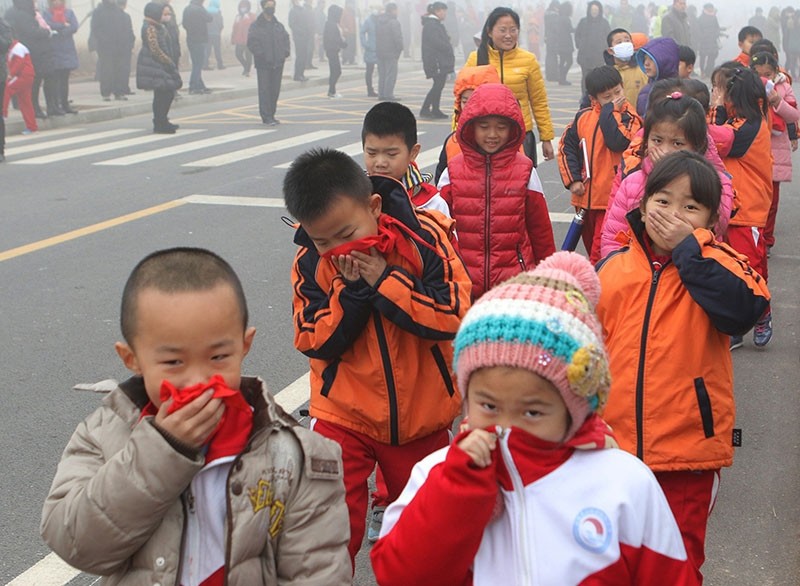 This photo taken Dec. 23, 2015, shows elementary school students covering their mouths and noses after the classes were suspended because of ,red alert, for heavy smog in Binzhou, east China's Shandong province. (AFP Photo)
by Daily Sabah Aug 28, 2018 12:00 am

Air pollution causes a significant reduction in intelligence, new research shows, warning of another harmful effect of the toxic air darkening city skylines around the globe.

Although the research was conducted in China, it is relevant for 90 percent of the world's population breathing in toxic levels of pollutants.

The U.S.-Chinese study found that high pollution levels led to lower language and arithmetic test scores, on average equivalent to a one-year loss in a person's education.

"Polluted air can cause everyone's level of education to reduce by one year, which is huge," Xi Chen, one of the researchers at Yale School of Public Health, said.

"But we know the effect is worse for the elderly, especially for those over 64, and for men, and for those with low education. If we calculate [the loss] for those, it may be a few years of education."

Researchers analyzed arithmetic and language tests conducted by China Family Panel Studies on 20,000 people between 2010 and 2014. The results were compared with records of nitrogen dioxide and sulphur dioxide pollution in the locations of the test-takers.

The longer people were exposed to polluted air, the more significant the damage was to their cognitive abilities, especially language skills. Men were more harmed than women.

Chen said the harm was the most severe for those over 64 years old, pointing out that most people "usually make the most critical financial decisions in old age."

The study was the first of its kind to include people of all ages and note the difference between men and women.

Derrick Ho, another researcher from Hong Kong Polytechnic University, said of the results: "It is because high air pollution can potentially be associated with oxidative stress, neuroinflammation, and neurodegeneration of humans."

Chen said air pollution was the most likely cause of the loss of intelligence noted in the study, and that the team did not think the results were a correlation.

Because the study followed the same people as air pollution levels varied over time, other possible causal factors in intelligence were accounted for, he said.

The researchers also accounted for the natural decline in intelligence as people age, and did not include people who were impatient or uncooperative during the tests when pollution was high.

Air pollution levels were also found to have a short-term impact on cognitive function, which Chen says could have a significant effect, such as for students taking an important exam on high pollution days.

Chen emphasized that the results are "the same wherever you live. As human beings we have more in common than differences."

He urged governments to "take concrete measures to reduce air pollution," saying "there is no shortcut to solve this issue."

"That may benefit human capital, which is one of the most important driving forces of economic growth," he added.

According to the World Health Organization (WHO), the world's 20 most polluted cities are in developing countries, many in India and several in China.

The physical harms of air pollution – which causes 7 million premature deaths each year – are well-documented, but the mental effects are less known.

The study was published in the journal Proceedings of the National Academy of Sciences,