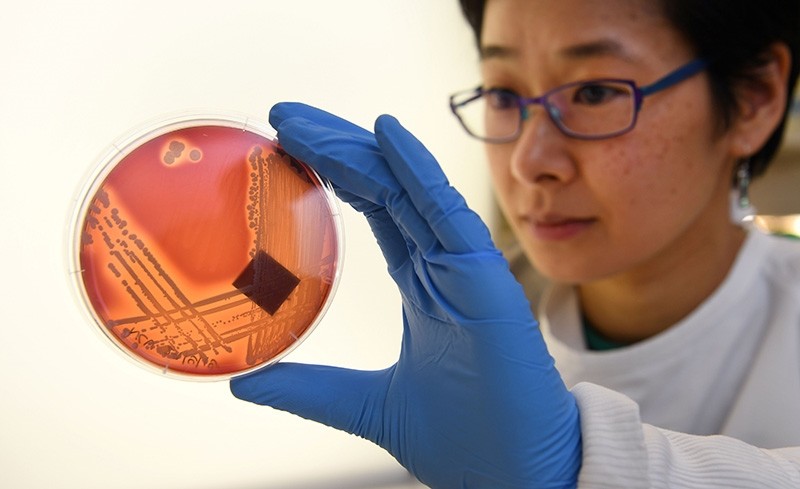 Jean Lee, a PhD student at Melbourne's Doherty Institute, inspects the superbug Staphylcocus epidermidis on an agar plate in Melbourne on Sept. 4, 2018. (AFP Photo)
by Sep 05, 2018 12:00 am

A superbug resistant to all known antibiotics that can cause "severe" infections or even death is spreading undetected through hospital wards across the world, scientists in Australia warned Monday.

Researchers at the University of Melbourne discovered three variants of the multidrug-resistant bug in samples from 10 countries, including strains in Europe that cannot be reliably tamed by any drug currently on the market.

"We started with samples in Australia but did a global snapshot and found that it's in many countries and many institutions around the world," Ben Howden, director of the university's Microbiological Diagnostic Unit Public Health Laboratory told AFP.

"It seems to have spread."

The bacteria, known as Staphylococcus epidermidis, is related to the better-known and more deadly MRSA.

It is found naturally on human skin and most commonly infects the elderly or patients who have had prosthetic materials implanted, such as catheters and joint replacements.

"It can be deadly, but it's usually in patients who already are very sick in the hospital... it can be quite hard to eradicate and the infections can be severe," Howden said.

His team looked at hundreds of S. epidermidis specimens from 78 hospitals worldwide.

They found that some strains of the bug made a small change in its DNA that led to resistance to two of the most common antibiotics, often administered in tandem to treat hospital infections.

"These two antibiotics are unrelated and you would not expect one mutation to cause both antibiotics to fail," said Jean Lee, a PhD student at Melbourne's Doherty Institute, and co-author of the study.

Many of the most powerful antibiotics are extremely expensive and even toxic, and the team behind the study said that the practice of using multiple drugs at once to prevent resistance may not be working.

The researchers said they believe the superbug is spreading rapidly due to the particularly high use of antibiotics in intensive care units, where patients are sickest and strong drugs are prescribed as routine.

Howden said his study, published in the journal Nature Microbiology, showed the need for better understanding of how infections spread and which bacteria hospitals choose to target.

"This highlights that the use of more and more antibiotics is driving more drug-resistant bacteria," he said.

"With all bacteria in a hospital environment we are driving more resistant strains and there's no doubt that antibiotic resistance is one of the biggest dangers to hospital care worldwide."