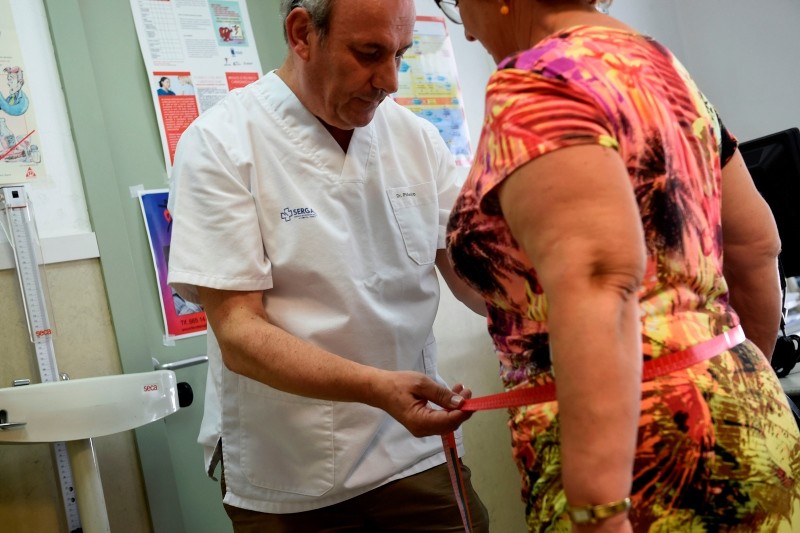 In a remote corner of northwestern Spain, a small town has set itself the ultimate weight loss challenge: by early 2020, its residents must shed 100,000 kilos (220,500 pounds).

Gone are bacon and fried calamari from the diets of thousands of residents in Naron who are taking to sport again as part of a slimming program that kicked off in January.

"In the 21st century, people forget they're made to walk," says Carlos Pineiro, the 63-year-old family doctor behind the program, which has the support of the town council.

Pineiro often swaps his practice for the local wooded park where he helps dozens of others warm up and exercise.

Conrado Vilela Villamar, a 65-year-old former crane operator, is one of Pineiro's regulars.

"In Spain where people say that you can eat everything in the pig, from the tip of the tail to the tip of the nose, the first food I stripped from my diet are tripe, pork belly and cold cuts," he says.

Perched on the Atlantic coast of the Galicia region, the 40,000-strong town counts 9,000 overweight residents and another 3,000 who suffer from obesity, Pineiro says.

Known for its gastronomy and often gargantuan dishes, Galicia is the region in Spain with the most overweight people, according to a study by the Spanish Society of Cardiology.

"The rainy weather means people stay at home a lot with a very big daily ingestion of calories," says Pineiro.

More than 4,000 residents -- or a tenth of the population -- have joined the project.

To show their support, the mayor, Marian Ferreiro, and her municipal councilors weighed themselves together in public on giant scales.

The program, drawn up by local doctors, offers personalized diets and physical activity adapted to those who adhere.

Every now and then, they come to the town's health centers to weigh themselves.

"I walk with friends including a woman who is 80 or so, who holds on to my arm," says Maria Teresa Rodriguez, 55.

Every day, she walks or does gymnastics for an hour and a half, and has started dancing on Fridays since her "legs no longer hurt."

In the town, 18 restaurants now offer healthier dishes by promoting an Atlantic-style diet full of seafood.

"I replace salt with algae, fish infusions or a simple dehydrated mussel, and butter with virgin olive oil," says Diego Platas, a 37-year-old restaurant owner as he cooks a local mackerel.

'I pedal while reading'

Earlier this month, the World Health Organization warned that obesity and the growing proportion of people who are overweight risked reversing the general trend of rising life expectancy in Europe.

In Spain, the topic regularly comes up.

An interview with a 34-year-old patient in eastern Spain who weighs 385 kilos recently made headlines.

"It's not at all easy to convince adults" to change their lifestyle, says Pineiro, whose own family history has been blighted by genetic cardiovascular illness, albeit not linked to weight.

"Some say: 'the last thing I need is for the doctor to tell me what I must do'."

He is more hopeful that children will catch on.

At the Jorge Juan school in Naron, for instance, pupils are being encouraged to live a healthy lifestyle in a pilot program in the town.

During recess, "we go out to the seaside promenade" with the youngsters, says Maria Jose Cazorla, a 55-year-old teacher, who has lost 14 kilos in a year.

The school's 224 students are given the option of doing sport for one hour every day and those who are reticent can ride an exercise bike for an activity called "I pedal while reading."

Those who live nearby are encouraged to walk or cycle to school, or ride scooters, wearing special electronic bracelets that let parents know when they have arrived.

The slogan "get addicted to fruit" adorns the walls of the school where fruit is given out every morning.

But "we don't ever talk about weight directly" to the children, which "would have a stigmatizing effect," says Pineiro.

Beyond the 100,000-kilo weight loss challenge, he hopes residents will adopt "a healthy lifestyle to put a brake on chronic illness", which would also reduce health spending.