Turkish baths: A source of healing 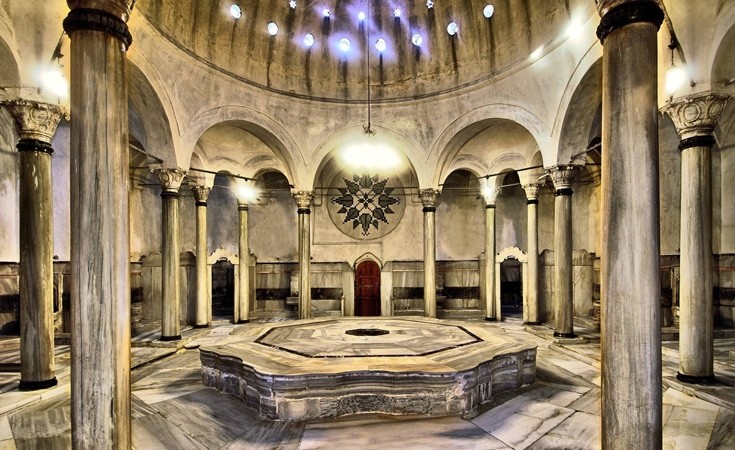 Dating back to the Ottoman Empire, Turkish baths come to the forefront as a place for social gathering, ritual cleansing connected to the Muslim faith and an architectural witness to the sultans' power and wealth

Without a doubt, healing baths, unique structures, are one of the Ottoman Empire's major contributions to the world, as the pureness of water was always appreciated in the Ottoman Empire and wider Islamic world. This awareness, when combined with the architectural prowess of the Ottomans, led to the emergence of pure baths, an environment for socializing.

Following the conquest of Istanbul, thousands of baths were built in the Ottoman Empire. In the 17th century, there were 168 big market baths just in Istanbul. The Bath of Cağaloğlu, the last of these great baths is particularly important because it was the last big bath constructed after Sultan Mustafa III banned the construction of big baths due to the city's increasing need for water and wood. Built in 1740, the Bath of Cağaloğlu, one of the biggest twin baths in Istanbul, is located next to the Basilica Cistern and constructed in the time of Mahmud I. The layout of the bathing and resting sections of the building in a baroque style represent features that differ from that of Ottoman architecture. The gentlemen's section allows a transition from the dressing room covered with a large dome to the resting room covered with a small dome and seven vaults. The heat room is covered with a large dome seated on arches connecting eight marble pillars. In the middle, is a navel stone (massage platform) and dome-shaped bathing spots in the corners with a hairdresser and shoeshine parlor in the bath. 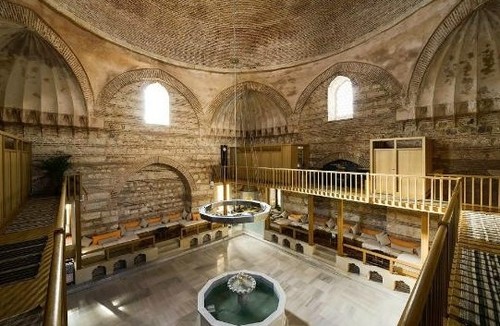 The dome of the Bath of Çemberlitaş has some windows for light.

Another historic bath is the Bath of Çemberlitaş, built in 1584 by Sinan the Architect on order of Nûrbânû Sultan, the mother of Sultan Murad II, to generate income for Vâlide-i Atik Kulliyah (social complex). The Bath of Çemberlitaş was planned as a twin bath, completely identical and adjacent to each other. The dome in the section for both ladies and gentlemen has some holes for light. Today, only the holes in the ladies' section are in the original form. The bath has 38 bath basins (faucets). The structure is among the last period works of Sinan the Architect. In this period, he brought together functional diversity, elegance and serenity to this structure, without abandoning simplicity. It is therefore the focus of interest for local and foreign researchers, universities, photographers, filmmakers, press organizations and students. Both baths offer rubbing, bubble-massage and skin care with clay mask services and can you further enjoy your bath with rose, lemon and olive oil soaps. Waistcloths used in the baths are made of a special fabric made in Denizli province. The best thing though is the fruit and cold drinks offered in the lounge area. Prior booking is a must.

To experience a modern bath, I recommend travelling to historical Afyon province, famous for its natural spring water. Thousands of local and foreign tourists come to Afyon throughout the year. The most luxurious and equipped thermal hotel in the city is NG Hotel, part of a chain with hotels in the Sapanca district of Sakarya province. Afyon NG Hotel has 16 pools and the rooms are thermal, rich in minerals. Use the thermal pools in the spa section of the hotel. Also, its bath part is pretty extravagant like an extravagant bathhouse in Tunisia. I loved the red ceramics and the mirrors with red frames on the walls, marble lion heads and decorations on the ceilings. 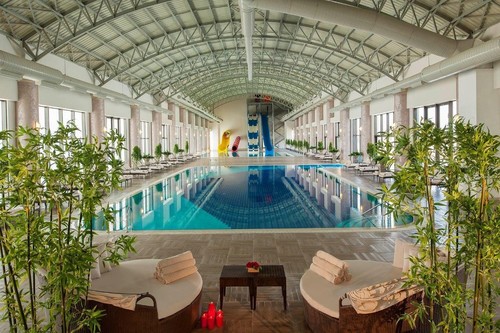 The marble fountain and the crystal chandelier in the resting room were also impressive. There is a wide selection of massages in the spa. This time I chose the horoscope massage. An aroma-therapeutic massage is done with oil determined according to your horoscope. Another interesting choice is the massage done with hot stones. NG Hotel believes in its claim of being a spa hotel so much that it offers it to corporations. The establishment, which created the corporate wellness concept, offers vacation packages for companies to hold meetings and remove stress, suggesting that companies give special breaks to employees to get rid of years of tiredness at NG Hotel and become more productive. According to hotel management, some companies give three weeks of vacation. These types of benefits for employees in Europe and in the U.S. are a rising trend.