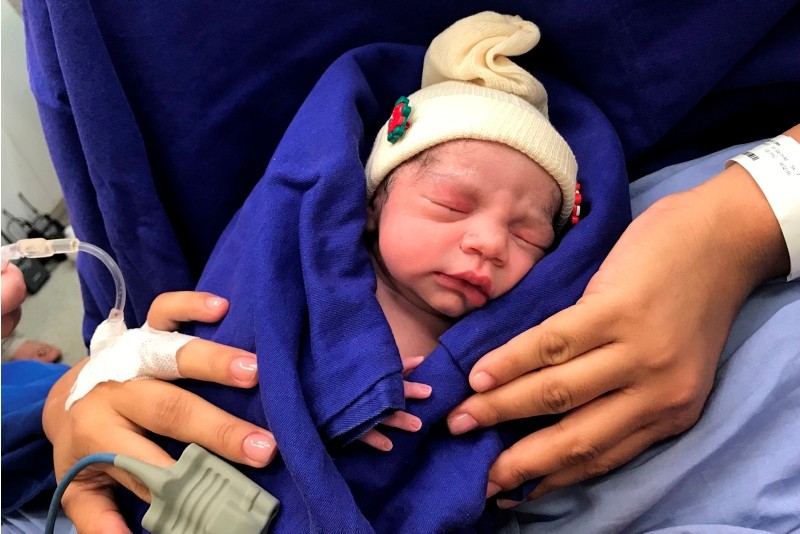 This Dec. 15, 2017 photo provided by transplant surgeon Dr. Andraus shows the baby girl born to a woman with a uterus transplanted from a deceased donor at the Hospital das Clinicas of the University of Sao Paulo School of Medicine,. (AP Photo)
by Dec 05, 2018 12:00 am

In a medical first, a mother who received a uterus transplant from a dead donor gave birth to a healthy baby, researchers reported Wednesday.

The breakthrough operation, performed in September 2016 in Sao Paulo, Brazil, shows that such transplants are feasible and could help thousands of women unable to have children due to uterine problems, according to a study published in The Lancet.

The baby girl was born in December 2017, the medical journal added.

Until recently, the only options available to women with so-called uterine infertility were adoption or the services of a surrogate mother.

The first successful childbirth following uterine transplant from a living donor took place in 2014 in Sweden, and there have been 10 others since then.

But there are far more women in need of transplants than there are potential live donors, so doctors wanted to find out if the procedure could work using the uterus of a woman who had died.

Ten attempts were made -- in the United States, the Czech Republic, and Turkey -- before the success reported Wednesday.

Infertility affects 10 to 15 percent of couples.

Of this group, one in 500 women have problems with their uterus -- due, for example, to a malformation, hysterectomy, or infection -- that prevent them from becoming pregnant and carrying a child to term.

"Our results provide a proof-of-concept for a new option for women with uterine infertility," said Dani Ejzenberg, a doctor at the teaching hospital of the University of Sao Paulo.

He described the procedure as a "medical milestone".

"The number of people willing and committed to donate organs upon their own death are far larger than those of live donors, offering a much wider potential donor population," he said in a statement.

The 32-year-old recipient was born without a uterus as a result of a rare syndrome.

Four months before the transplant, she had in-vitro fertilisation resulting in eight fertilized eggs, which were preserved through freezing.

The donor was a 45-year-old woman who died from a stroke.

Her uterus was removed and transplanted in surgery that lasted more than ten hours.

The surgical team had to connect the donor's uterus with the veins, arteries, ligaments, and vaginal canal of the recipient.

To prevent her body from rejecting the new organ, the woman was given five different drugs, along with antimicrobials, anti-blood clotting treatments, and aspirin.

After five months, the uterus showed no sign of rejection, ultrasound scans were normal, and the woman was menstruating regularly.

The fertilized eggs were implanted after seven months. Ten days later, doctors delivered the good news: she was pregnant.

Besides a minor kidney infection -- treated with antibiotics -- during the 32nd week, the pregnancy was normal. After nearly 36 weeks a baby girl weighing 2.5 kilograms (about six pounds) was delivered via caesarean section.

The transplanted uterus was removed during the C-section, allowing the woman to stop taking the immunosuppressive drugs.

At age seven months and 12 days -- when the manuscript reporting the findings was submitted for publication -- the baby was breastfeeding and weighed 7.2 kilograms.

"We must congratulate the authors," commented Dr. Srdjan Saso, an honorary clinical lecturer in obstetrics and gynaecology at Imperial College London, describing the findings as "extremely exciting".

Richard Kennedy, president of the International Federation of Fertility Societies, also welcomed the announcement but sounded a note of caution.

"Uterine transplant is a novel technique and should be regarded as experimental," he said.