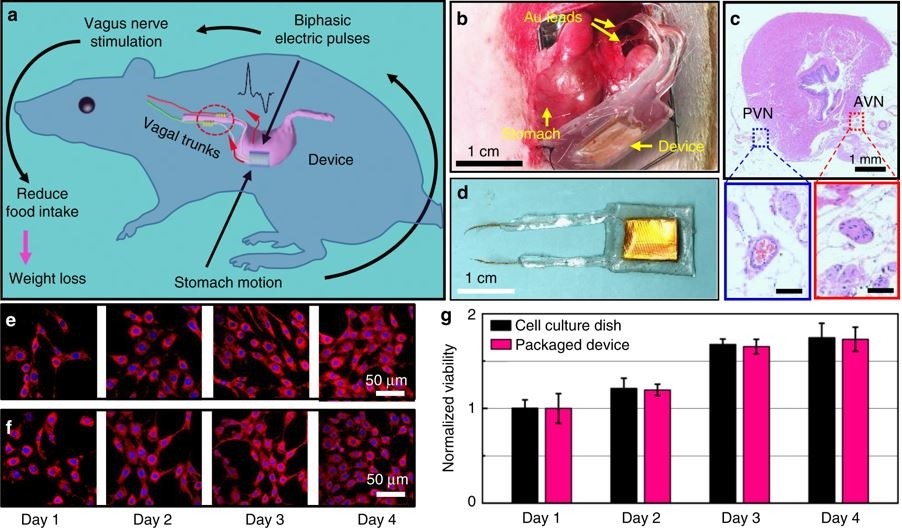 Scientists and engineers from the University of Wisconsin-Madison, who were led by Dr Xudong Wang, have invented a tiny little device that could end obesity once and for all. Using the recently discovered strategy of vagus nerve stimulation (VNS), the implant has led to a 40 percent weight loss in rats.

The 1 centimeter device attaches to the stomach and tells the brain it is full via gentle zaps of electricity. The implant, which has not yet been named by its inventors, activates when the stomach naturally starts digestion. The device also does not need a battery, meaning it does not need to be removed for maintenance.

The electric signals generated by this device can stimulate the vagal afferent fibers to reduce food intake and achieve weight control.

"The pulses correlate with the stomach's motions, enhancing a natural response to help control food intake," Dr Wang said to the Daily Mail.

According to Wang the device has no electronics and relies on the movement of the stomach wall to power internal generators.

"Our body knows best," he added.

However, a study performed on mice showed that once the device is removed, previous eating habits return and weight gain restarts, unlike with a gastric band or bypass.

The details of the study were published in the latest issue of the science journal Nature Communications.

According to research conducted worldwide last year, there are more than 700 million obese children and adults around the world.