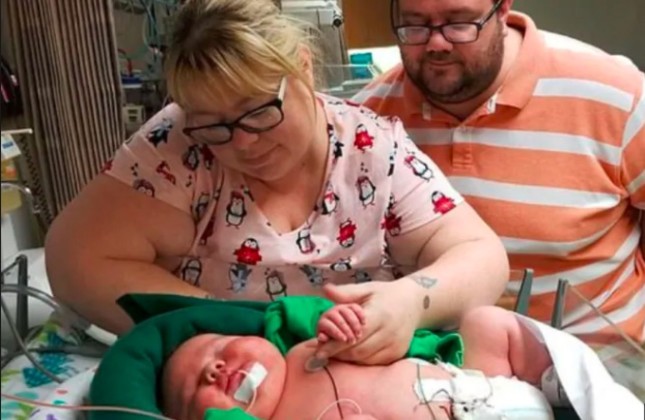 Baby Ali broke records, coming into the world, weighing 14 pounds, 13 ounces (6.7 kilograms) - twice the average weight for a newborn. Mother and baby, who was born by C-section, are doing fine.

Whereas most babies are born on average at 7.5 pounds, Ali came out weighing 14 pounds, 13 ounces, breaking the record at Arlington Memorial Hospital in Texas, at twice the average weight for a newborn. Ten pounds is considered at the top range, according to the University of Michigan School of Medicine.

This means that Ali's older sister, Annabelle, fell within "normal" range, albeit by just a hair, weighing 9 pounds, 10 ounces when she was born two years ago. But given that boys tend to be heavier than girls, and first babies are usually lighter than those born afterward, there was nowhere for the second-born Ali to go but up. And up (and out) he went.

"I was like 'Omg really' - I don't think it even registered," mother Jennifer Medlock told CBS News in Dallas-Fort Worth.

Ali was born on Dec. 14 and went home on Dec. 19, after spending a few days in the neonatal intensive care unit for low blood sugar and platelets, KTVT reported.

Home in time for Christmas, Ali is already wearing clothing for a 3- to 6-month-old, with a size 3 diaper, said his father, Eric Medlock, to CNN.

"He's sleeping and eating and he's just a healthy boy," he told CNN. "Just a little bit bigger than you would expect."

Share on Facebook Share on Twitter
Previous in Health Unhealthy diets cause cholesterol levels to peak hence it is important... Next in Health British scientists have developed a new medicine that may prevent...
DAILY SABAH RECOMMENDS