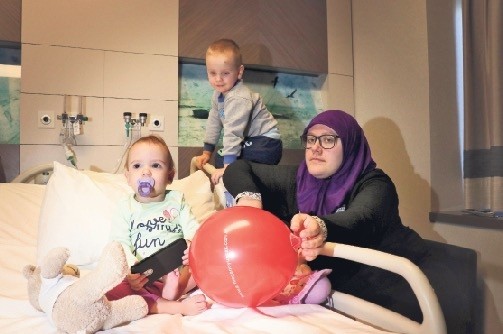 Edina Muharemovic, 26, sitting beside her daughter Asija in an Istanbul hospital.
by Anadolu Agency Feb 07, 2019 12:06 am

The baby girl was only a year-and-a-half old, but too much activity would make her black out, her mother remembered.

"She was losing consciousness when she moved a lot," said Edina Muharemovic, 26, sitting beside her daughter Asija in an Istanbul hospital. Asija is just one of thousands of children across the world suffering from a congenital heart defect. She was unable to get treatment in her home country, Bosnia and Herzegovina, due to the lack of experienced doctors as well as money. But two weeks ago, Asija, together with her mother and father, came to Istanbul from the city of Zenica, Bosnia-Herzegovina, as her doctor urged them to seek treatment in Turkey.

"We had gone to hospitals in Sarajevo and Belgrade to find a solution for her condition but we found none," her mother told Anadolu Agency in Istanbul.

"For some time she was in good health, but after a while, she started fainting when she moved too much, and then doctors told us that she needed immediate surgery," she said.

Speaking about his young patient, Dr. Tayyar Sarıoğlu, an experienced cardiologist at Istanbul's Acibadem Bakirkoy Hospital, said Asija was having difficulty breathing and had serious heart disorders when she first came to the hospital.

"She had very serious heart problems. The veins on the right side of the heart were reversed. One of the cardiac valves was underdeveloped," he explained.

The Muharemovic family was fearful and anxious about their daughter's health because they knew treatment would be a very tough process.

"Through performing special open-heart surgery, we widened a section of the divisions in the heart and increased the oxygenation to her lungs," said Asija's doctor. "Now she can carry on her life as almost as a normal baby," he added.

Edina said she cannot thank Turkey enough. "We're very glad for the treatment of everyone here, from the doctors to the hospital employees," she added. "To those facing a similar situation, I would advise them to come here."

2 hours without a heart

Like the younger Asija, Lejla Kurtanovic, a 2-year-old Bosnian girl, has a similar story. Lejla, who underwent heart surgery at the same hospital, came to Istanbul from Sarajevo, the capital of Bosnia and Herzegovina, about a month ago with her parents. A shy, quiet girl, Lejla suffered from a big hole in her heart, her main cardiac veins were reversed and a vein feeding her lung was quite narrow, according to Sarıoğlu, who also treated her."We switched the veins through a tunnel we opened in the heart and we put in a vein with valves transplanted from animals," he explained. "Now she's regained her health and can continue her life just like others do."

Her surgery lasted for around five hours, including two hours when doctors stopped her heart and used machines to keep her alive.

"If they hadn't had surgery, they [the girls] would have died," Sarıoğlu said. "When such babies aren't treated, they run the risk of losing their lives within a few hours or a few days."

"We heard that doctors here do their jobs very well, and then we decided to come here. Austria and Belgrade were other options, but we chose Turkey," Kurtanovic said.

An estimated 303,000 newborns worldwide die within four weeks of birth every year, due to congenital anomalies including heart defects, according to the World Health Organization (WHO). But 90 percent of those born with congenital heart defects can be successfully treated through operations, said Sarıoğlu. Underlining the importance of advanced technology and skilled doctors, he said that Turkey has been a beacon for neighboring countries. More than 4,500 people with heart defects have regained their health through heart surgeries at the Istanbul hospital, explained the seasoned cardiologist.