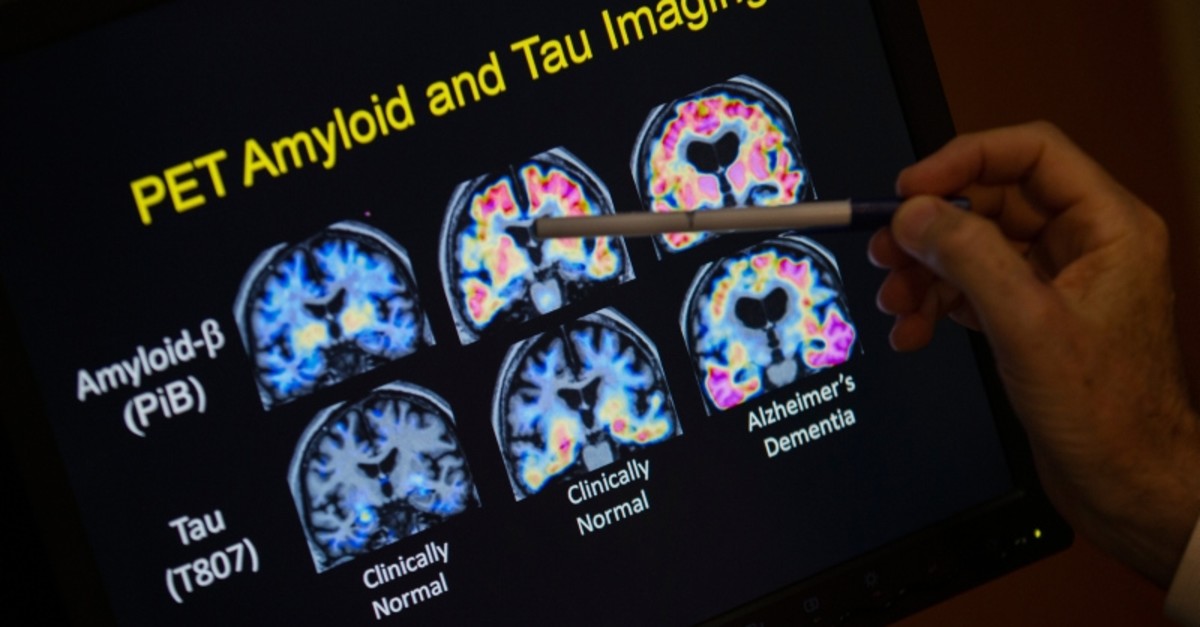 In this May 19, 2015, file photo, a doctor points to PET scan results that are part of a study on Alzheimer's disease at a hospital in Washington. (AP Photo)
by Associated Press Apr 16, 2019 9:58 pm
Does an older friend or relative have a hard time hanging up on telemarketers? Or get excited about a "You've won a prize" voicemail? New research suggests seniors who aren't on guard against scams also might be at risk for eventually developing Alzheimer's disease.

Elder fraud is a huge problem, and Monday's study doesn't mean that people who fall prey to a con artist have some sort of dementia brewing.

But scientists know that long before the memory problems of Alzheimer's become obvious, people experience more subtle changes in their thinking and judgment. Neuropsychologist Patricia Boyle of Rush University's Alzheimer's disease center wondered if one of the warning signs might be the type of judgment missteps that can leave someone susceptible to scams.

"When a con artist approaches an older person, they're looking for a social vulnerability — someone who is open to having a conversation with a complete stranger," said Boyle. Then the older person must interpret that stranger's intentions and emotions, with little else to go on, in deciding whether to believe what they're peddling, she explained.

Boyle turned to data from the Financial Industry Regulatory Authority, which operates a fraud "risk meter," to determine behaviors that could signal scam vulnerability — things such as answering the phone when you don't recognize the number, listening to telemarketers, finding it difficult to end unsolicited calls, being open to potentially risky investments and not realizing that seniors often face financial exploitation.

Boyle studied 935 seniors, mostly in their 70s and 80s, with no known brain problems who were enrolled in a long-running memory and aging project in Chicago. They took a scam awareness questionnaire and then took yearly brain tests for an average of six years.

During the study, 151 seniors were diagnosed with Alzheimer's and another 255 with mild cognitive impairment, sometimes a precursor for Alzheimer's. The participants who'd had what Boyle calls low scam awareness at the study's start were more likely to have developed each of those conditions than seniors who were more aware of scam vulnerability.

For a closer look, the 264 participants who died during the study underwent brain autopsies. Sure enough, the lower the scam awareness at the study's start, the more people had a buildup of sticky plaque in their brains that is a hallmark of Alzheimer's, Boyle reported in Annals of Internal Medicine.

The study can't prove a link between low scam awareness and impending decline in thinking and memory, cautioned Dr. Jason Karlawish of the University of Pennsylvania in an accompanying editorial.

Karlawish described one of his own patients who confessed to a grandson, "I think I've been had" by a lottery scam that persuaded him to pay taxes up-front so he could receive his purported winnings. It was just too hard to hang up on the polite caller. Three years later, that patient shows no sign of cognitive impairment, said Karlawish, who said he's flummoxed by how the clever crooks managed to rob the man.

Still, the study results "should be a call to action to health care systems, the financial services industry and their regulators," Karlawish wrote, urging further research into what he called "notable findings."

The possible scam link isn't surprising, agreed Alzheimer's Association vice president Beth Kallmyer, who also said it needs more research. In fact, she said seniors may be reluctant to report fraud for fear family members might suspect they were sucked in because of health problems.

Dementia concerns or not, she advises seniors simply to not answer unsolicited calls or emails from people they don't recognize, making it harder for them to be targeted.

Previous research has suggested that seniors can begin to have trouble managing their finances even with aging's normal cognitive slowing.

And the rise in elder fraud has reached such a level that investment firms now are supposed to ask customers for the contact information of a "trusted person" they can alert if they suspect a case of financial exploitation. Just last week, federal agents broke up a Medicare scam that sold unneeded orthopedic braces to hundreds of thousands of seniors. And every tax season the government warns people not to fall for phone calls from IRS impostors — that agency won't call for payment.

"As older people start making mistakes in financial, health care and other types of complex decisions, we do need to raise awareness and start asking, 'Do they need some help?'" Boyle said. "It doesn't necessarily mean someone is going to go on to develop dementia. But we should become more aware."