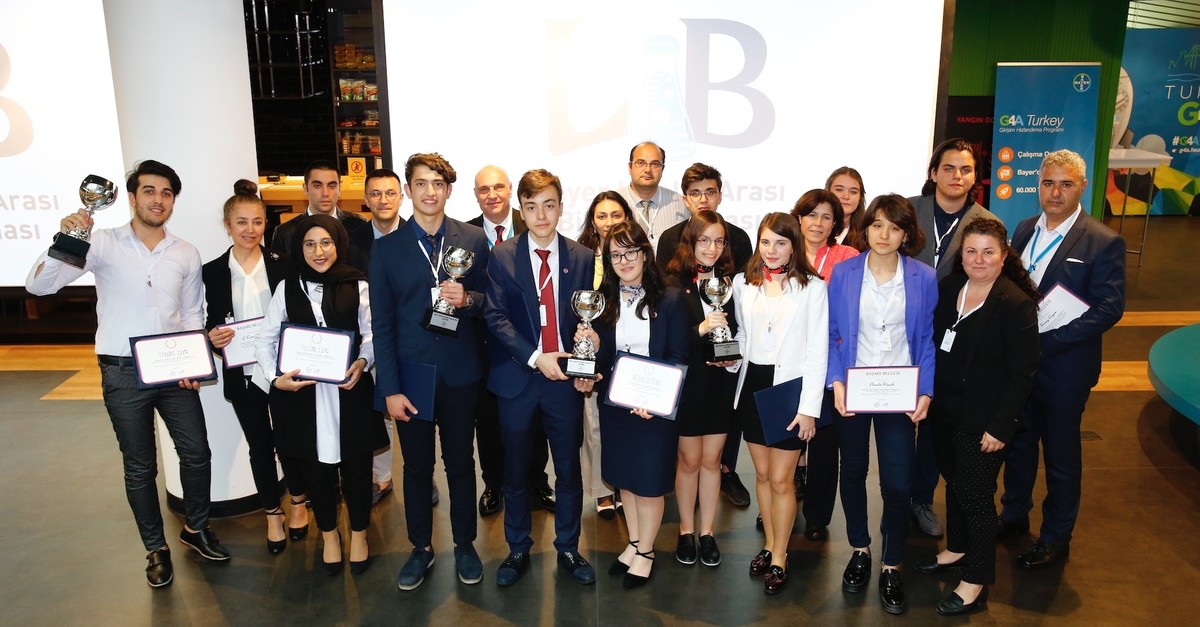 Winners of the Bayer Inter-High School Science Competition pose with their awards.
by Şule Güner Jun 03, 2019 12:04 am

A total of 659 projects were proposed for the Bayer Inter-High School Science Competition, which was held by Bayer to encourage high school students to work in science under the theme Add Value to Life. The winners of this year's competition were Selma Öztürk and Ömer Faruk Küser from İzmir Science High School for their project Breaking Antibiotic Resistance by Developing a New Antibiotic Transport System. Alperen Telatar from Kaş Turan Erdoğan Yılmaz High School came in second with his project From Marine Sponge to Tissue Scaffold, while Zeynep Ilgın Demir and Müge Balta from İzmir Science High School came in third with their project The Effect of Locust Moth and Gam on Bone Fracture Treatment.

Selcan Evin and Ferhat Evin were awarded the Bayer Special Award for their project Research of Antioxidant Activities of Four Plant Species Growing in Siirt and Their Usability in Prostate Cancer Treatment. These projects, which could turn into biotechnology start-ups in the future, demonstrated the positive results of increased science, technology, engineering and mathematics (STEM) training in Turkey. It is encouraging that the 10 finalist projects that were up to international standards emerged from cities in Turkey such as western province of İzmir, southern resort town of Antalya and Siirt.

There is quite an interesting story from Siirt behind the special award-winning project developed by two cousins, Selcan Evin from Siirt Anatolian High School and Ferhat Evin from Istanbul Pertevniyal High School: The Evin cousins wanted to investigate the reason for low cancer rates in Siirt. By looking at air pollution, living conditions and eating habits data in the region, Ferhat and Selcan determined that there was a difference in nutrition. They decided to search the antioxidant effects of extracts of plants grown in the region, such as bıttım, bıttım gum, helizotu and dandelion, in the treatment of prostate cancer.

Here are the results of Selcan and Ferhat's projects that proved the therapeutic aspects of these four plants: It was detected that dose-dependent death was detected on PC3, the prostate cancer cell line, after 24 hours of application of all extracts. It was also found that extracts of bıttım, helizotu, dandelion and bıttım gum were the most effective plants, respectively, in the evaluation of cytotoxicity. In the project, the effects of four different plant species on various cancer cells were searched for the first time. This study will bring diversity to the literature considering the effects of these plants on PC3 and other cells.