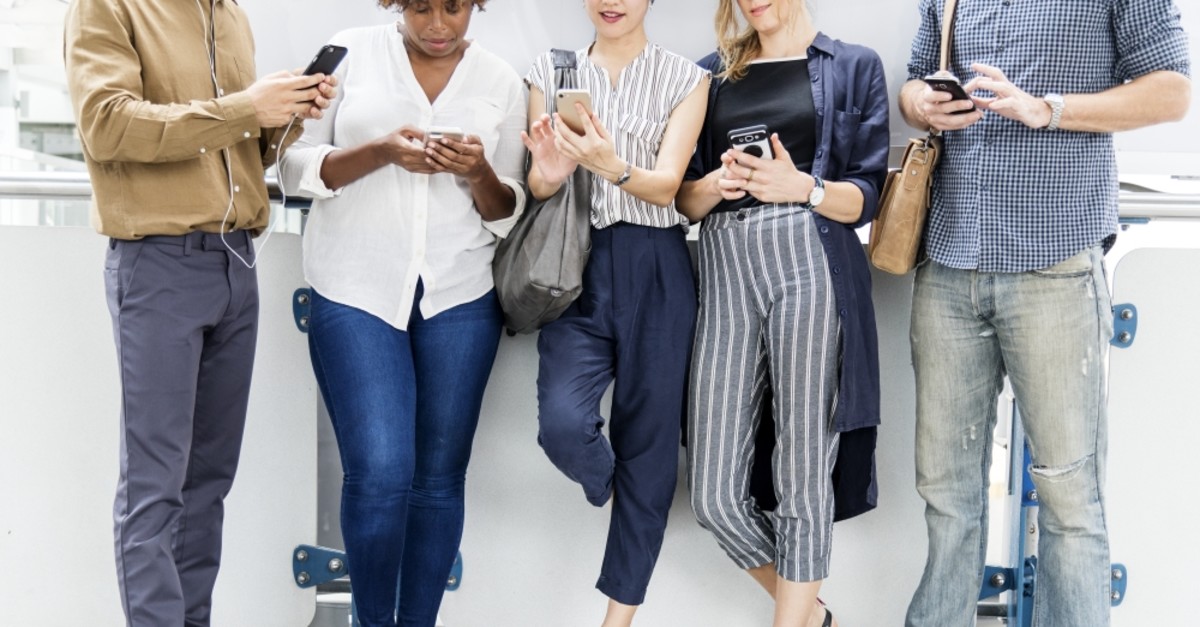 According to experts, the internet triggers technology addiction.
by Anadolu Agency Jun 26, 2019 12:33 am

As the world evolves into a more digitalized place with every passing day, people are increasingly stranded in what is known as technology addiction, mainly triggered by the excessive use of social media.

Deniz Ünay, an Istanbul-based social media specialist, describes technology addiction as "intense interest in personal computers and mobile devices" and "a habit to get away from society." Raising concern for "the globally growing disaster," Ünay warned that technology addiction causes trauma in society.

There are over 40 million internet users in Turkey, he said, and 90 percent of them are mobile users. As mobile devices become smarter, the active use of social media has increased.

"The internet, which has reached every sphere of our lives, has become an open prison that confines people with the rapid spread of social media platforms used to attain information," Ünay said. "The internet has shown us that it is not as innocent as it appears to be, being at the forefront of technology addiction," he warned.

Specialized in the effects of social media and mobile life, Ünay said curiosity is the main motive behind using social media and online game websites. "We spend most of our time on our mobile phones, tablets or personal computers, dealing with [the curiosity over] who liked our posts, who shared what and what videos they uploaded," he said.

"At last, it has become such an everyday routine that people check their social media accounts even while working or eating," the specialist added.

Negative impacts of intense technology use

It is difficult to make people of a certain age get addicted to certain things, but this is not the case for technology addiction.

The internet, online games and social media platforms work well in creating technology addicted people regardless of their age, according to Ünay. The intense use of technological devices leads to some physical and social problems simultaneously, he warned.

Looking at the screen for a long time causes pain and stiffness in neck muscles, impairment in body posture and eye inflammation, while its reflection on social life is a reduction in social activities, depression, attention deficit, failure in time management and decline in academic achievement. Technology addiction is included in the addictions list of Turkish Green Crescent (Yeşilay) - a nonprofit organization fighting addictions and proving services to stay away from them.

"Internet or technology addiction is defined as a situation in which an addict feels deprivation when they are not able to get technological material they are addicted to," according to the Turkish Green Crescent.

The spread of social media use, especially among children ignorant of its threats, has paved the way for malevolent people to take insidious actions, Ünay said. "A group that is followed by our children and young people, calling themselves a so-called phenomenon, is particularly engaged in fulfilling a mission of encouraging drugs on these platforms." Despite the fight by security forces against them, the efforts are not enough, he complained.

Emphasizing the importance of an effective control mechanism against the dangers of social media, Ünay said people of all ages should be educated on the issue. "The best solution against technology addiction can be developed through raising awareness. Individuals with increased awareness will not lose the social and cultural texture of their lives by not using technology without need and will be protected from the social and physical damages of addiction," he asserted.

Ünay said technology addiction is quite difficult to prevent since it is a man-made problem, but it can be eliminated. "The best way to reduce addiction is to go back to old habits. We took young people and children away from the parks, gardens and streets and gave them a dangerous device and brought them to all the evils of the world," he said.