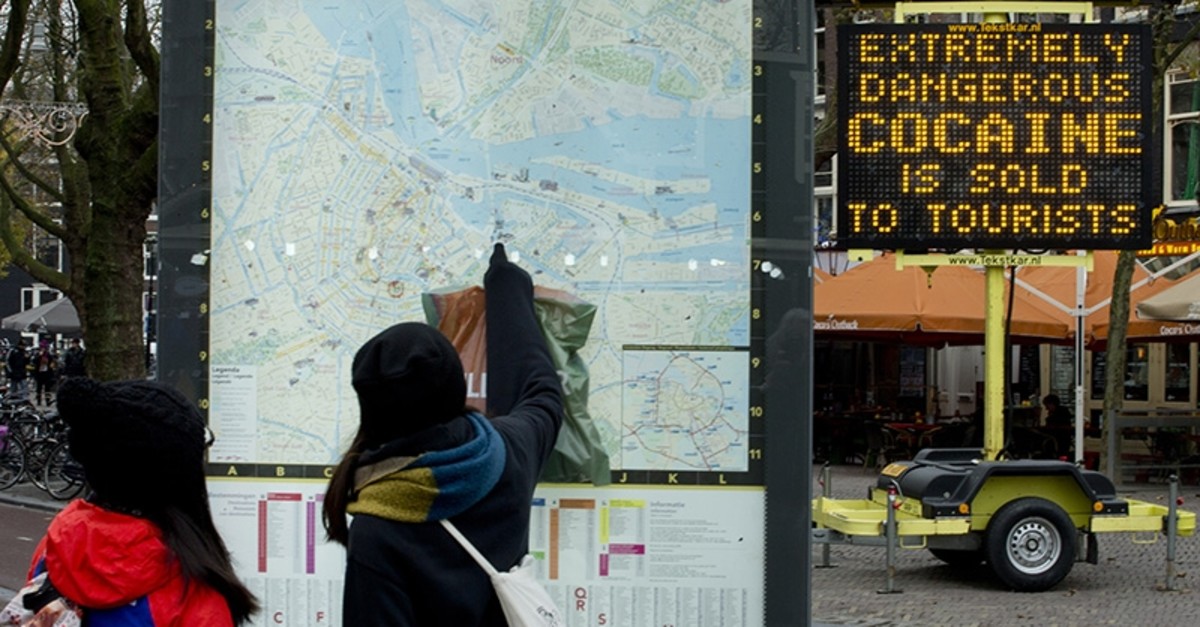 An electronic sign post warns tourists of extremely dangerous cocaine being sold to tourists on Rembrandtplein square in the center of Amsterdam, Netherlands, Thursday, Nov. 27, 2014. (AP Photo)
by Aug 28, 2019 6:44 pm

Long famed for its casual attitude to marijuana use, the Dutch capital Amsterdam says it now has a serious problem with hard drugs that have brought increased violence and corruption at the hands of "hustlers, parasites and extortionists."

Money from the lucrative trade in drugs such as cocaine and Ecstasy as well as marijuana has also found its way in the city's flourishing real estate market, according to a city-commissioned report entitled "The Other Side of Amsterdam."

Although marijuana is illegal in the Netherlands, Amsterdam's famed "coffee shops" have for decades sold it openly for the pleasure of residents and tourists alike.

Prosecutors do not press charges for possession of small amounts and the report said police had largely given up on trying to enforce small drug offenses in the face of widespread social acceptance.

But this policy has de-facto spread to other drugs, it said.

"Amsterdam has given free rein...to a motley crew of drugs criminals, a ring of hustlers and parasites, middle-men and extortionists, of dubious notaries and real estate agents," the report said.

At the top of the criminal chain are wealthy organized crime bosses who may not be physically located in Amsterdam, the report said.

At the bottom are "criminal lackeys such as scooter and taxi chauffeurs and even youthful messenger-boys set to follow quite a career path: offering murder as a service."

Recent studies found that 21 percent of Amsterdam's population has used marijuana in the past year and 17 percent had used "hard drugs" such as cocaine and Ecstasy, it said.

Health authorities estimate up to 70% of people attending dance festivals may use Ecstasy, it said.

She intended to continue current programs, especially those aimed at countering drug money entering the real estate market, and to improve Amsterdam's cooperation with law enforcement, Halsema said in a statement.