Robotic surgery facilitates operations from a world away 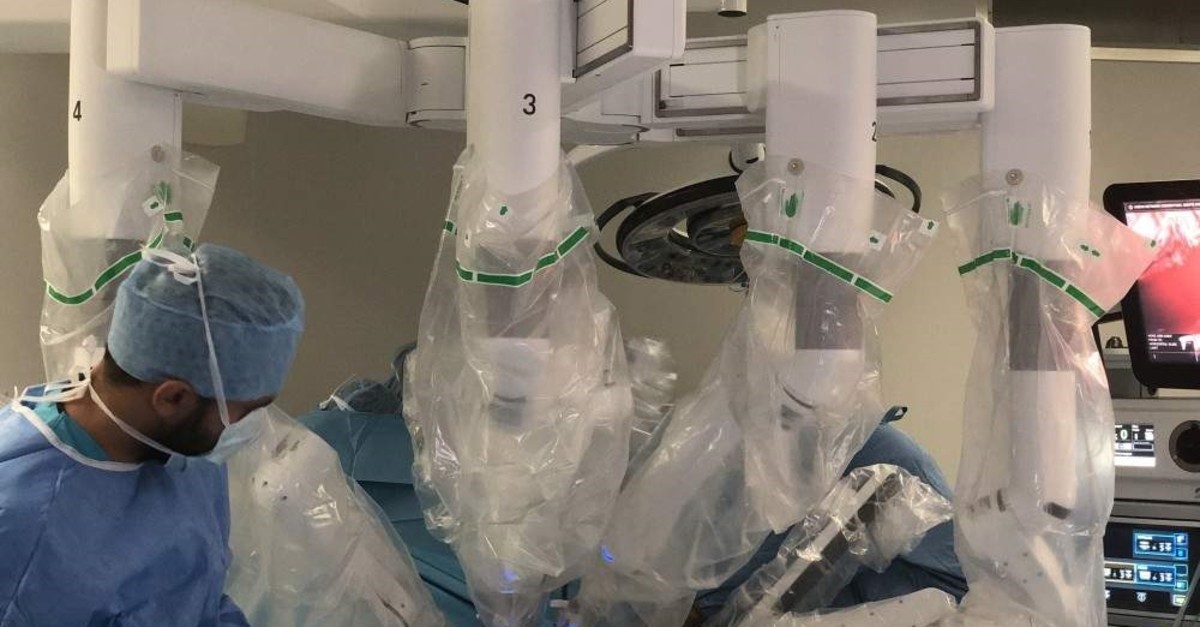 Prof. Dr. Oktar Asoglu and his team performed robotic surgery on esophageal cancer (Photo by: Deniz Unay / AA)
by Anadolu Agency Oct 20, 2019 9:42 pm
Robotic surgery, a method that has emerged with the development of space technology, was originally conceived and designed to allow doctors to operate on their patients even when they are not physically in the same location.
Over the years, it has changed the way operations are currently being carried out.
However, robotic surgery has not made its way into the medical field as quickly as expected due to the high costs involved.
A single robot costs around $2 million, and when its maintenance costs are factored in, it becomes a tool that requires a large budget for hospitals.
Oktar Asoğlu, a professor at Istanbul’s Maslak Acıbadem Hospital, talked about robotic surgery technology after operating the device, with the attendance of Deniz Unay, a social media expert, who observed the operation.
Asoğlu evaluated the three basic elements of robotic surgery, including doctor-dependent and patient-dependent advantages as well as the weaknesses and strengths of the device.
"With the help of current technology, patients in New York, Tbilisi or Baku can technically be treated from Istanbul," said Asoğlu, who is an expert in robotic surgery.
He said the surgeon can operate even if they are not physically available – for instance, when they are sick.
"However, the only obstacle are the laws and regulations of countries. Surgeries cannot be operated between two different countries," he added.
Asoğlu went on to say that the number of surgeons able to operate such devices is another problem.
"It is not very easy to find an experienced surgeon. For example, a surgeon can perform approximately 70 robotic rectal surgeries effectively, which is quite a high number, when compared to hospitals, which are capable of approximately 10 rectal surgeries annually.
"In Turkey, there are roughly 4,000 rectal cancer patients, and 2,000 to 2,400 of them are estimated to be in need of surgery. It is very difficult to reach the number," he said.
Asoğlu stressed that another obstacle ahead is the problem of centralization in European countries; that is to say, the collection of certain cases in certain centers.
“Centralization – the procedure of collecting data of actual operations – also helps training surgeons as well as improves the artificial intelligence of the robots,” he added.
"Abroad, European countries such as the U.K. and France solved this problem. With the help of centralization, we must train our [Turkish] surgeons very well so they can perform their operations everywhere in the world, just as an American surgeon can remotely perform surgery in his country on a patient in Turkey," he added.
Speaking about patient-dependent characteristics of robotic surgery, Asoğlu said delicate surgeries can be used as a substitute such as a laparoscopy a type of surgical procedure that allows a surgeon to access the inside of the abdomen and pelvis without having to make large incisions.
"Especially in narrow body cavities or in complex surgeries, there are areas where laparoscopic surgery and robotic surgery can be used as substitutes for each other," he said.
"Thus, surgeons should be able to operate in both ways very well, depending on the patient and the disease. The important thing here is to know which method should be used for which patient," he added.
Asoğlu underscored that surgeons can be trained in university hospitals with the help of financial support.
"The universities, therefore, need financial support, reconstruction and generations that can transfer their knowledge in every field. The results of these are not in the short term, but in the long term," he added.
Last Update: Dec 20, 2019 1:09 am
RELATED TOPICS