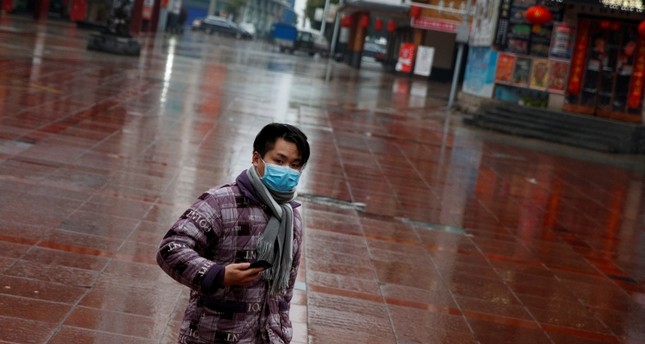 A man wearing a face mask walks in a deserted shopping area in Jiujiang, Jiangxi province, China, as the country is hit by an outbreak of the novel coronavirus, February 2, 2020. (Reuters Photo)

A Chinese woman infected with the new coronavirus showed a dramatic improvement after she was treated with a cocktail of anti-virals used to treat flu and HIV, Thailand's health ministry said Sunday.

"The lab result of positive on the coronavirus turned negative in 48 hours," Kriengsak said.

"From being exhausted before, she could sit up in bed 12 hours later."

The doctors combined the anti-flu drug oseltamivir with lopinavir and ritonavir, anti-virals used to treat HIV, Kriengsak said, adding the ministry was awaiting research results to prove the findings.

The news comes as the new virus claimed its first life outside China – a 44-year-old Chinese man who died in the Philippines – while the death toll in China has soared above 300.

Thailand so far has detected 19 confirmed cases of the virus believed to have originated in the central Chinese city of Wuhan, which is under lockdown.

That is the second-highest number of cases outside of China, with Japan recording 20.

So far, eight patients in Thailand have recovered and returned home, while 11 remain in the hospital.

In a video released Sunday, Thai health minister Anutin Charnvirakul visited a patient from Wuhan who had recovered from the coronavirus, chatting with her amicably in Mandarin as she thanked him and the medical staff.

Thai authorities are trying to balance the screening of inbound Chinese visitors with the economic needs of its tourist sector, which is heavily reliant on arrivals from the mainland.

Messages of support saying "Our hearts to Wuhan" in English, Chinese and Thai were plastered on a Bangkok mall popular with tourists.

The bulk of confirmed cases have been Chinese visitors to Thailand, but on Thursday the kingdom recorded its first human-to-human transmission when a Thai taxi driver was diagnosed with the disease.

The taxi driver had not traveled to China but may have had contact with tourists.

Thailand's government is also battling public criticism that it has been slow to evacuate scores of its citizens from Hubei province, at the center of the outbreak.

Anutin said the evacuation would happen Tuesday, and the returnees would be quarantined for 14 days.

Share on Facebook Share on Twitter
Previous in Health The rapidly spreading coronavirus is currently detected through respiratory... Next in Health Most children are lucky to be born healthy. However, a few unlucky...
DAILY SABAH RECOMMENDS