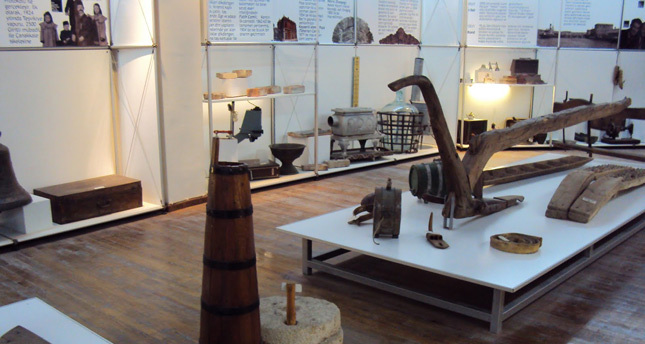 by Daily Sabah Dec 19, 2014 12:00 am
The exhibition "Piri Reis ve Haritaları" (Piri Reis and His Maps) that was on display at the Istanbul Naval Museum was transformed into a sole-exhibition museum in Çanakkale after contributions by the governorate and the Provincial Chamber of Commerce and Industry. Embracing history, technology and art under the same roof, Çanakkale's new museum project is the brainchild of Sinan Ceco and Hasan Mert Kaya that began in November 2012. Two years later, the museum's opening ceremony took place on Tuesday. Visitors can see four original copies of Piri Reis' map and guidebook "Kitab-ı Bahriye," (The Book of the Navy), large detailed maps and an interactive platform that invites visitors to take a journey around the Mediterranean Sea. A special section showcases certain parts of Piri Reis' book, where one side displays his drawings while the other side shows a current satellite image of the location. A short, 10-minute film depicts the life story of the renowned Ottoman admiral and cartographer. Aside from these sections, the museum also features mobile map lockers. His original world map is engraved on a glass panel and displayed in the lockers, while another locker shows a map of the modern world and allows visitors to easily compare the two maps. The museum's interactive platform offers an epic journey using Piri Reis's animated world map. Visitors enjoy exploring different geographical regions and oceans through the platform. An observation deck is also available, which was built in the shape of a ship's rail and makes visitors feel as if they are in the middle of sea.

A number of cultural events were held to mark UNESCO's declaration of 2013 as the year of Piri Reis celebrating the 500th anniversary of the famous world map that he drew. Among them, the exhibition that opened at the Istanbul Naval Museum, which was attended by Culture and Tourism Minister Ömer Çelik, on Oct. 25, 2013, was probably the most-mentioned one.