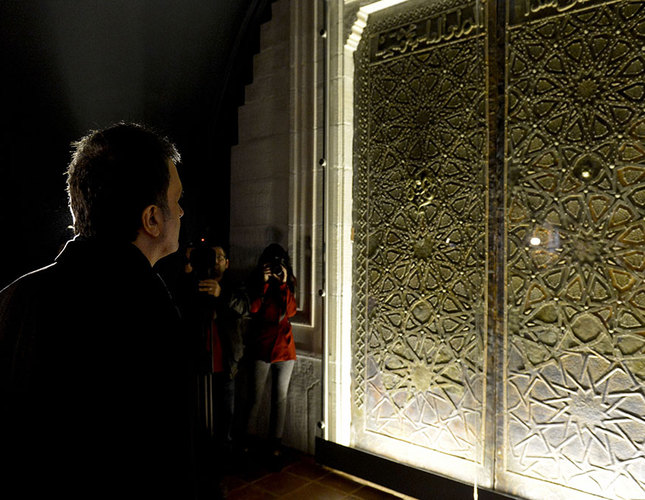 Standing in the former palace of Ottoman Grand Vizier İbrahim Pasha, a museum housing extensive collections of religious and Turkish treasures reopened after a thorough makeover

Facing the Blue Mosque in Istanbul's Sultanahmet Square, the Turkish and Islamic Art Museum was re-opened on Friday after intensive restoration work that cost TL 16.4 million ($7.09 million). Erected in 1524, the newly renovated museum was formerly the residential palace of Ottoman Sultan Süleyman I's Grand Vizier İbrahim Pasha. Speaking during the opening ceremony, Culture and Tourism Minister Ömer Çelik said safeguarding our cultural heritage is not a preferential decision, but a must for the future. "The essence of Turkish politics is rooted in the country's cultural geography. The Culture and Tourism Ministry prioritizes to duly pass on all cultural assets to future generations without discrimination," he continued. Çelik said 123 museums have undergone maintenance and restoration since 2003. During the same period, 44 museums and sub-units opened for visits. He further stated the ministry is conducting 52 other projects on museum construction and restoration. In parallel with modern museology practices, Turkey's museums are turning into a center of attraction with additional sections, such as movie halls, restaurants, libraries and cafes. Temporary and permanent exhibitions and academic and cultural events at museums are encouraged as well.

Çelik said the foundation of the Turkish and Islamic Art Museum was a concrete step against the plundering of Turkish artifacts by Western countries at the time of World War I and a systematic example of gathering Islamic and Turkish artwork under the same roof. In addition to the museum's strategic role, it leaves its mark in history as being the only grand vizier's palace that has survived to the present day.

More about the museum

In the early years of the 20th century, the museum, previously named "Evkaf-ı İslamiye Müzesi" (Museum of Islamic Foundations), was established to protect and promote notable examples of Seljuk and Ottoman Era art. The historic building opened its doors to visitors on April 27, 1914, when the Ottoman Empire was about to collapse and various Islamic artworks were illegally taken abroad. Only seven months prior to the empire's involvement in World War I, the museum gathered a wide range of Islamic works brought from mosques, tombs and other religious places. Celebrating its 100th year, the museum now showcases 45,000 pieces from almost all periods of Turkish and Islamic art.

Among the museum's priceless artworks are Quranic manuscripts dating back to the eighth century, the reign of the Umayyad Caliphate. The collection "Şam Evrakları" (Damascus Documents) contains early copies of the Quran and was brought to the museum in 1917. Giving rise to the field of Islamic archaeology, findings from excavations in Iraq's Samarra city are on display in a special section along with those from the Syrian city Raqqa. Additionally, the Islamic relics section shows certain belongings of Prophet Muhammad. Visitors may also see Islamic calligraphy, rugs, tiles and ethnographic works featuring different cultures of nomad groups across Turkey. The restoration project was started in 2012.