Churchill was fascinated with Islam and Muslim culture, letter reveals 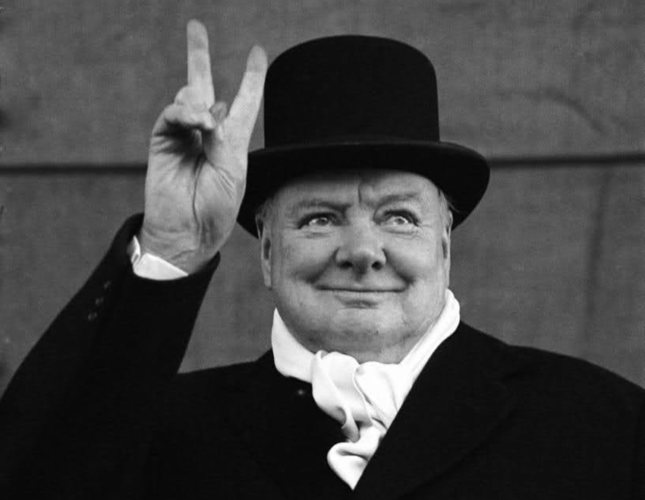 by Daily Sabah Dec 28, 2014 12:00 am
In his home country Britain, and all around the world, Winston Churchill is regarded as a great statesman, who stood firmly against the Nazi aggression in the most desperate times, or did his best to warn Western democracies against Soviet expansionism. However, a new and surprising aspect of Churchill has been revealed - that he was fascinated with Islam and the Muslim Culture to the point that his relatives warned him not to convert.

According to Patrick Sawer's article published by the British daily The Telegraph, Churchill's future sister-in-law, Lady Gwendoline Bertie (later Spencer Churchill), warned him in an August 1907 letter, saying "Please don't become converted to Islam; I have noticed in your disposition a tendency to orientalise [fascination with the Orient and Islam], Pasha-like tendencies, I really have."

Lady Gwendoline, who married Churchill's brother Jack, added: "If you come into contact with Islam your conversion might be effected with greater ease than you might have supposed, call of the blood, don't you know what I mean, do fight against it."

The letter was discovered by Warren Dockter, a history research fellow at Cambridge University, while researching his forthcoming book, "Winston Churchill and the Islamic World: Orientalism, Empire and Diplomacy in the Middle East."

To acknowledge the source of his fascination, Dr. Dockter points out to Churchill's military career, which gave him the opportunity to serve in areas including Sudan and Northwest India (currently Pakistan), that have predominant Muslim populations.

"But during this period Churchill was in the Liberal phase of his career, having switched to the Liberals in 1904." Dockter said, referring to his later shift to Conservatives.

"He often came to loggerheads on imperial policies with hard-line imperialists such as Frederick Lugard, the High Commissioner of Northern Nigeria. Churchill was opposed to Lugard's punitive expeditions against Islamic tribes in northern Nigeria."

Dockter also points out Churchill's tendency to regard Islam and Christianity as equals, a surprisingly progressive notion for the time, and his admiration for the military prowess and history of expansion of the Ottoman Empire.

Sawer states that in October 1940, Churchill approved plans to build the London Central Mosque and set aside £100,000 for the project, although the war against Nazi Germany was in its height and London was devastated under German bombings. Sawer argues that Churchill wanted to win the support of Muslim world. He openly expressed the practical benefit in December 1941 in the House of Commons, saying "Many of our friends in Muslim countries all over the East have already expressed great appreciation of this gift."

Yet neither this "gift", nor Churchill's admiration for Islam, was enough to convince the entire Muslim world to support the Allies in WWII. Many Muslims from the Middle East, Balkans and Caucasus supported, or even fought alongside Axis powers. Especially when the Middle East was concerned, the dislike for the British rule and their policies, primarily on Palestine, drove Arab elites to seek support for Nazi Germany.

Churchill, at the time he served as the First Lord of the Admiralty, was the mastermind of Gallipoli campaign against the Ottoman Empire which proved disastrous both for the British and the Ottomans. He was a cabinet member throughout WWI and post-war period that largely re-shaped the Muslim geography, and initiated some of the most important policies in the region that deepened the drift among Western and Islamic civilizations as some may define and argue.

"Churchill's attitude may appear hypocritical, given his forthright defense of the British Empire – which at its height ruled over millions of Muslims across India, Egypt and the Middle East." Sawer said, also referring to Churchill's memoirs of Mahdist War of late 19th century from his book The River War (1899), in which he depicted the fundamentalist Mahdi rule and its effects as "How dreadful are the curses which Mohammedanism lays on its votaries... Improvident habits, slovenly systems of agriculture, sluggish methods of commerce ... The influence of the religion paralyses the social development of those who follow it."

Therefore, as Dockter puts it, Churchill's admiration was "largely predicated on Victorian notions, which heavily romanticised the nomadic lifestyle and honour culture of the Bedouin tribes". Still in Churchill's defense, Dockter describes his views are "in stark contrast to the purely imperialistic and orientalist perspective of many of his contemporaries."

Sawer also points out to the fact that even he was ahead of his contemporaries in understanding the Muslim world and culture, he still did not know the exact differences between Shia and Sunni Muslims while he was the Secretary of State for the Colonies. Thus, it is not surprising to see today that Iraq is turning into a failed state, a creation of British mandate rule during 1920's.