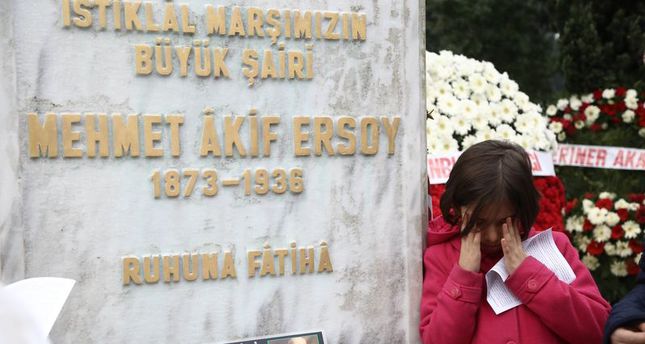 by AA Dec 28, 2014 12:00 am
Mehmet Akif Ersoy, the poet of the Turkish national anthem, was commemorated on the 78th commemoratıon of his death.

The Department of Social and Cultural Affairs of Istanbul Metropolitan Municipality, the Turkish Authors' Association, Sabahattin Zaim University and officials of Mehmet Akif Ersoy University attended the ceremony, which started with a moment of silence followed by the national anthem, "İstiklal Marşı."

Speaking at the ceremony, Yusuf Ziya Karacev, the deputy governor of Istanbul, emphasized that Ersoy, very well known for "İstiklal Marşı" and "Safahat," has a special place in the hearts of the people because of his devotedness to his values.

Karacev said: "Drawing inspiration from the light and thoughts of Mehmet Akif on the 78th year of his death, we think it is an important duty to protect our national and moral values and to inoculate young people with his ideals, values and the soul of 'İstiklal Marşı.' We keep going with the young in order to make his soul, ideas and dreams real without losing our love of country."

Muammer Yıldız, the director of National Education of Istanbul said that Ersoy is still a source of inspiration and enlightenment with his work and ideas.