Boğaziçi University exhibits over a century's worth of history 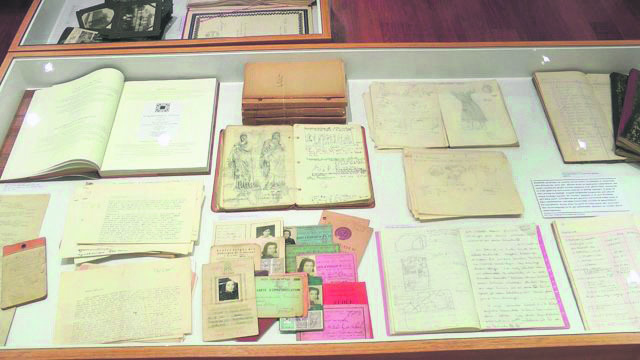 by daily sabah Apr 22, 2015 12:00 am
Images and documents shedding light on the corporate history of Robert Collage and Boğaziçi University from the mid-19th century to the end of the 20th century are on display for the first time in a comprehensive exhibition.

The exhibition, titled "Bavullardan Kataloglara Boğaziçi Arşivleri'ne Doğru" (From Suitcase to Catalogues: Through the Boğaziçi Archives), brings important documents covering a history of 150 years, from the late Ottoman Empire to the Republic of Turkey. The exhibition opened its doors on April 13. Available at Boğaziçi University Albert Long Exhibition Hall, the exhibition can be visited until May 29. Moreover, a book featuring the same title as the exhibition was published concurrently with the event.

Dating from the 1850s up to the 1980s, the content of the displayed written and visual documents regarding Robert College and Boğaziçi University range from history to literature, painting to architecture and archeology to foreign politics, among many more. The pieces that were chosen from nine different archives affiliated to the Boğaziçi University Archive and Documentation Center were prepared by a curatory team including Nurçin İleri and Burak Şuşut, under the supervision of Associate Professor Cengiz Kırlı of the Boğaziçi University Atatürk Institute.

The archives of Boğaziçi University and Robert Collage are normally introduced at Colombia University's Rare Books and Manuscripts Library in New York. However, following the protocol signed between the two universities, digital copies of the documents were sent to Turkey. The archive that unearths over a century of history includes more than 200,000 documents.

A huge selection of Ottoman-era magazines such as "Servet-i Fünun," "Asri Türkiye Mecmuası," and Republican-era daily papers including "Cumhuriyet," "Milliyet," "Medan," "Barış" and "Akşam," as well as news and comments about Turkey in the international media such as The New York Times and National Geographic are open for visitors.

"From Suitcase to Catalogues: Through the Boğaziçi Archives" not only features digital and hard copies of corporate documents, but also a selection from various archives such as the Adalet Ağaoğlu Research Chamber, the archive of well-known architectural historian and Boğaziçi University's founding chancellor and Aptullah Kuran, the collection of Aziz Ogan, the Halet Çambel and Nail Çakırhan Archeology, Traditional Architecture and History and Research Center Archive, the collection of former Foreign Minister Melih Rauf Esenbel, the Architectural Drawings Collection, which features drawings from the 1870s to the 1990s, the archive of the Scott Family and the Fuchs Culture and History Heritage Archive.

Curator of the exhibition, Associate Professor Cengiz Kırlı, drew attention to the historical importance of the archives that are open for public viewing within Boğaziçi University, as it covers a large cultural region and the period from the late Ottoman Empire to Turkish Republic. Stressing that the contribution and encouragement of Boğaziçi University Chancellor, Gülay Barbarosoğlu, made a great contribution toward the preparation of the archive, Kırlı underlined the significance of displaying these documents for the use of researchers and passing these written and visual materials to future generations.

Following the cataloguing and digitalization of the archives at Boğaziçi University Archive and Documentation Center, which will be finalized in 2016, the archives will be opened for researchers and academics.
Last Update: Apr 24, 2015 1:17 am
RELATED TOPICS