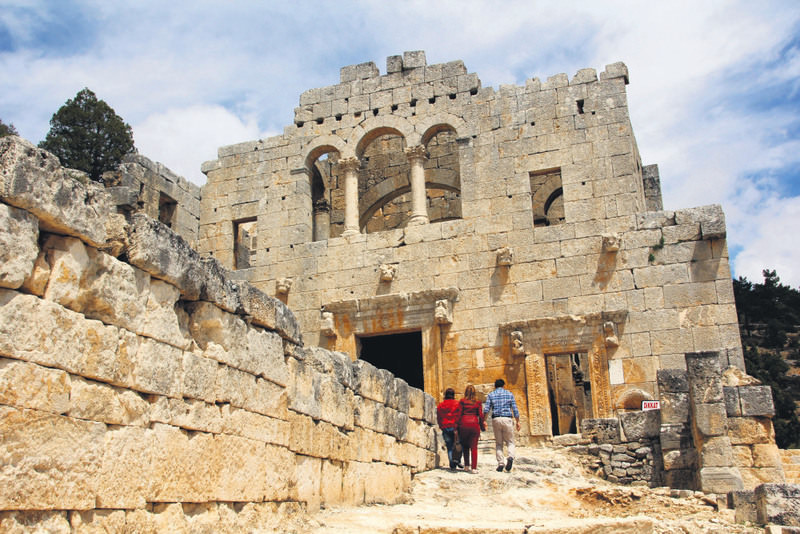 by Anadolu Agency May 05, 2015 12:00 am
Located in Turkey's Mersin province, the Alahan Monastery, which was included on UNESCO's Tentative World Heritage List, is now ready to be reopened following two years of restoration works. The historical building stands out with its resemblance to Istanbul's Hagia Sophia.

The monastery is believed to have been built between 440 A.D. and 442 A.D. and features two churches, monk's chambers that were carved in rock and tombs. The director of the Provincial Directorate of Culture and Tourism, Bahaettin Kabahasanoğlu, said the eastern and western walls of the church were fortified and the murals were renovated as part of the restoration project.

He said the eastern-facing church was fortified with a protective roof, wooden walking trails and steel stars for tourists to easily access the church. Emphasizing the Alahan Monastery is among the places where Christians perform pilgrimage, Kabahasanoğlu said, "This place is important for its architectural features and stonemasonry. The monastery is also a passageway for Christianity. Priests who were trained here were sent to Anatolia and other areas."

Kabahasanoğlu expressed his belief that the number of local and foreign tourists will increase following the renovation. "Before the restoration, the monastery was visited by 10,000 tourists annually; however, we expect this number to increase to 50,000," he said, adding people who come to visit the ancient monastery will be able tour the building easily and will be better informed. "Along with the St. Paul Museum and Church in Tarsus and the Ayatekla Church in Silifke, the Alahan Monastery will boost the region's tourism," he concluded.
RELATED TOPICS