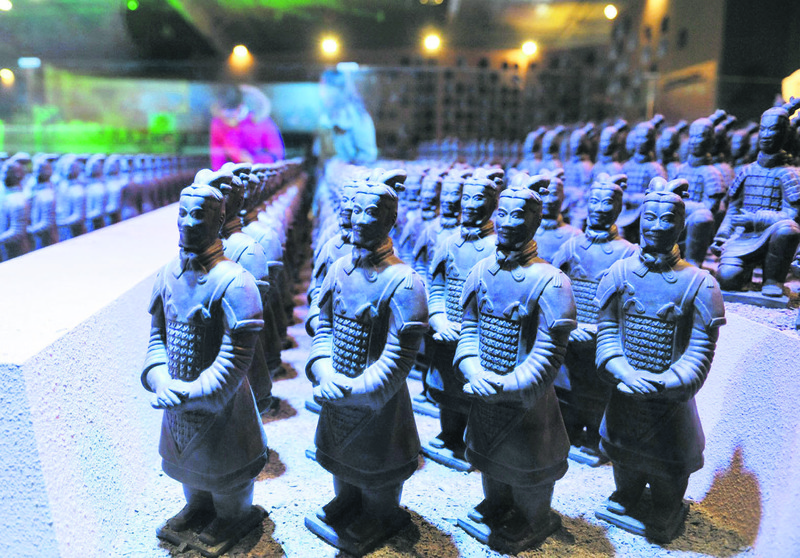 by Anadolu Agency May 08, 2015 12:00 am
New sculptures have been discovered in the mausoleum of the first emperor of China, Qin Shi Huang, which is famous for being guarded by the Terracotta Army, the thousands of sculptures of soldiers made from clay. Archeologists excavating the burial pit in the huge tomb in the city of Xian discovered 1,400 new soldier statues, 89 chariots and sculptures of horses by making use of digital scanning techniques.

One of the archeologists, Yuan Zhongyi, claimed that the pit mirrors "the essence of the Terracotta Army" as it contains chariots as well as sculptures of soldiers and horses. Explaining that there are kneeling archers, foot soldiers and cavalry in the pit, Yuan said the colorful paint on the soldiers is relatively well preserved. The first excavations in the pit began in 1994. During the first phases of the digs, a figure that was painted in bright green paint was unearthed. The paint on the earthen soldiers, which were made to protect the emperor after his death, fades away when it comes into contact air due to the arid climate. The excavation was stopped in 2008 until a new method would be found in order to protect the paint.

Yuan said that they plan to cover the newly found sculptures with plastic wrap in order to protect the paint and that the digital scanning technique will help them find the sculptures before their paint fades away. The Terracotta Army of Emperor Qin Shi Huang who was the founder of Qin dynasty and the first emperor of China was accidentally discovered by farmers on March 29, 1974 while trying to open a well in the Lintong region. Four pits were found during the first phase of the excavations. The 6,000 earthen soldiers that were discovered in the biggest pit caused a stir in archeology circles. While 120 sculptures of cavalry and archers were unearthed in the second pit and the third pit revealed taller sculptures that are thought to be higher ranking officers, the fourth pit was empty. In total, sculptures of 8,000 soldiers, 130 chariots, 520 horses and 150 cavalries were found.

It is believed that the underground army, composed of terracotta soldiers with different faces and expressions, were made to protect the emperor on his journey after death. The sculptures were placed 1.6 kilometers east of the tomb to protect the mausoleum against raids from the east, according to the order and war strategy of the era. The rectangle-shaped mausoleum, whose foundation is 350 meters from south to north and 345 meters from east to west, is 76 meters high like a pyramid. At 56 square meters, the mausoleum is considered to be the biggest in the world. It was included on the UNESCO World Heritage Sites list in 1987. Experts believe the mausoleum, which took 27 years to finish, was built by approximately 700,000 workers. No excavation has been undertaken in the actual tomb of Qin Shi Huang, who died in 210 B.C. at the age of 50. Besides fully detailed, life-size terracotta soldiers, archeologists also discovered thousands of swords and spears that had been covered with chromium to prevent rust.

Scientists produced 3-D computer models of 30 statues, focusing on their ears, and found that each statue has a unique ear shape suggesting that the sculptures were modeled on real humans. The technique that the artisans used to make the statues also shows how the technology of the age was advanced. Each statue made of clay was pierced and baked in over 300 degrees Celsius. Experts say that the holes were opened to prevent the sculptures from bursting in high temperatures and they were closed afterward. The bright red, green, blue, black and brown paint on the statues begins to fade and flake off once it contacts Xian's dry air.

The giant mausoleum of Emperor Qin Shi Huang was attacked a few years later his death by an enemy army. The wooden structure surrounding the Terracotta Army was set on fire and was heavily damaged. Emperor Qin Shi Huang brought all warring states and people in western China together under the roof of a single empire. He made laws, standardized the writing system, currency and units of measure. The emperor built roads and irrigation channels all over his empire and laid the foundation of the Great Wall of China, the longest wall in the world. He is known for his fear of death and search for the legendary Elixir of Life. He died at the age of 50 during while touring the east of the empire from taking of the mercury pills that were prescribed by his alchemists meant to make him immortal. Fearing a riot would break out upon the death of the emperor, his assistant kept his death secret from his subjects. According to historians, he placed bags of fish in the back of the chariot carrying the emperor's decaying body to prevent people from smelling it.
Last Update: May 08, 2015 11:16 pm
RELATED TOPICS