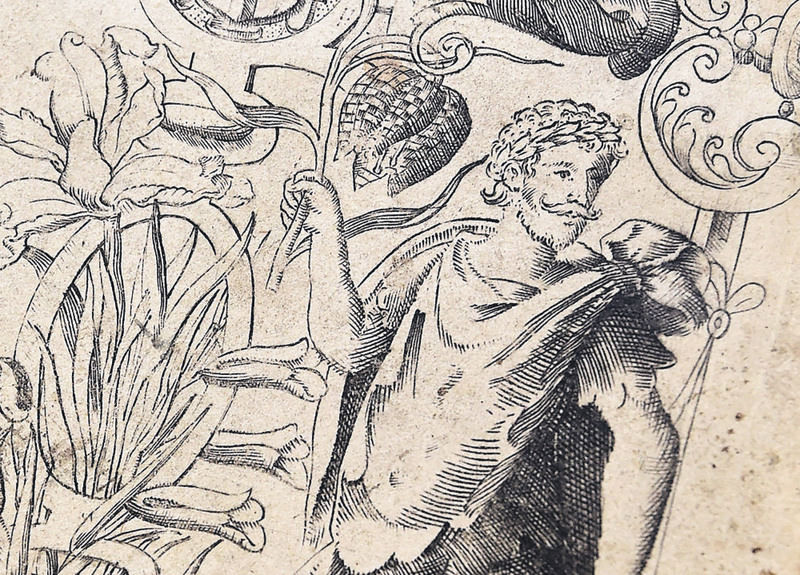 by May 20, 2015 12:00 am
A British magazine has published an image of a figure that it says is the first and only known demonstrably authentic portrait of William Shakespeare made in his lifetime.

The picture, identified by botanist and historian Mark Griffiths, is of a young, bearded man wearing a Roman-style laurel crown and holding an ear of corn. It will be published in the magazine Country Life on Wednesday.

Until now, the only accepted authentic likenesses of Shakespeare, in which he is depicted as bald, have been found in the First Folio of his works and his monument at Holy Trinity Church, Stratford-upon-Avon, both created posthumously.

Speaking on the magazine website, Griffiths said the discovery came when he began researching the biography of pioneering botanist John Gerard (1545-1612), author of "The Herball or Generall Historie of Plantes, published in 1597.

"I began to look at the title page engravings ... and realized it was full of allusions to people who had been involved in the creation of the book, and that four of the figures on the title page were in fact real people," he said.

While three were of Gerard himself, others were of Flemish botanist Rembert Dodoens and Queen Elizabeth's Lord Treasurer Lord Burghley, Griffiths said. The plants and motifs surrounding them in the engraving appeared to be elaborate Tudor references to the men themselves.

"And then there was a fourth figure who was dressed as a Roman and appeared to have something to do with poetry," he said.

Griffiths also discovered a cipher underneath the cover image containing clues about the fourth man.

"As I worked hard on this fourth figure, I realized it had to be William Shakespeare," he said.Griffiths believes that in the engraving, the Shakespeare figure is aged 33 and at the height of his celebrity – after writing "A Midsummer Night's Dream," and shortly before "Hamlet." He believes Shakespeare was given his literary start by Burghley and that he became almost a propagandist for him. Previous claims of discoveries of portraits of Shakespeare created during his lifetime have been generally discarded by scholars. But Country Life editor Mark Hedges was in no doubt. He said in a statement: "We have a new portrait of Shakespeare, the first ever that is identified as him by the artist and made in his lifetime."