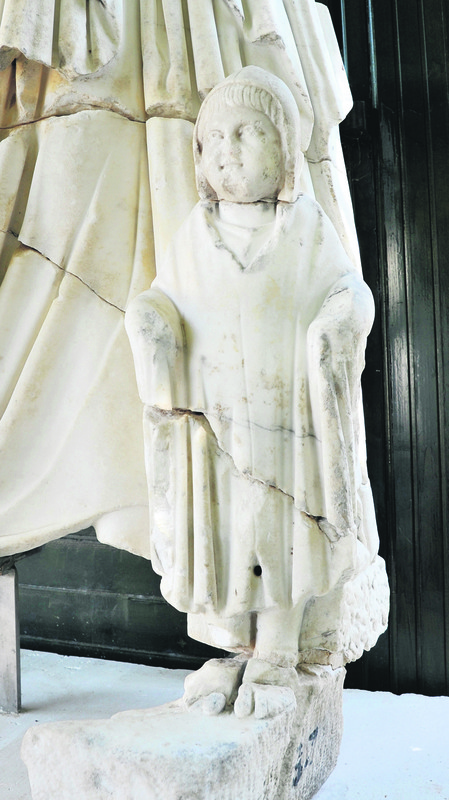 by Anadolu Agency Jun 10, 2015 12:00 am
The head of a statue of Telesphorus, a demi-god of convalescence, and the son of Asclepius, who is the god of medicine in Greek mythology, was recently discovered in the antique city of Perga, one of Turkey's oldest excavation sites, near the southern province of Antalya. The head is one of the missing parts of a sculpture found in 1981.

Speaking to Anadolu Agency (AA), Mustafa Demirel, the head of Antalya Museum and the Perga excavations, said the excavations began in 1946. He said Professor Jale İnan, Turkey's first female archeologist, discovered a sculpture of Asclepius in two parts during the early periods of excavations. Dating back to the second century A.D., the sculpture was found in a bath located in the city's south section. Demirel said the sculpture featuring a child body along with the main parts was brought to the museum and added to the inventory. "The excavation team was cleaning the street in front of a Hellenistic tower near the bath. They found a child's head on the surface, but did not know to whom it belonged at first," he said.

The head was recorded at the site and brought to the museum, Demirel continued. "Then, we found out that it belongs to Telesphorus, as I recalled the sculpture of Asclepius which was waiting in the museum's back yard. We checked it with restoration experts. After 34 years, we finally placed the head on the sculpture," he said. Demirel said the excavation team is happy to find the missing part after such a long time and hopes to find the other missing parts, mainly the sculpture's upper sections, in the future. He said the sculpture now looks more meaningful. "It is currently on display in our museum garden for visitors," Demirel said.
Last Update: Jun 12, 2015 1:02 am
RELATED TOPICS