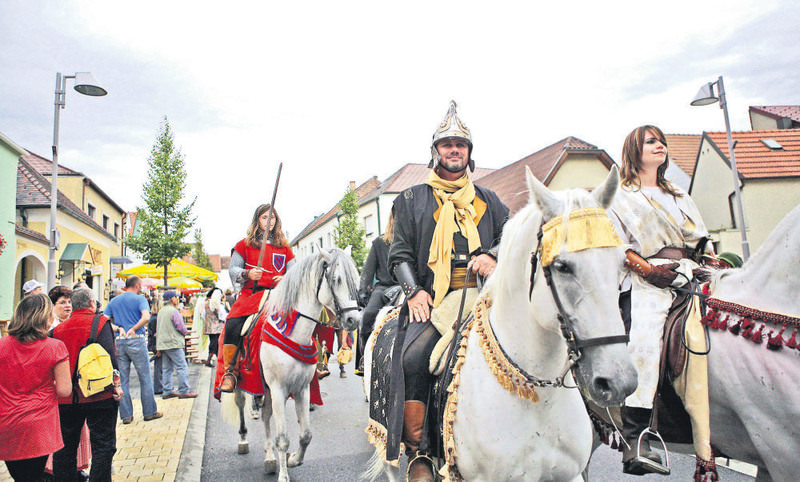 by Anadolu Agency Jun 15, 2015 12:00 am
The Ottoman-Hungarian Festival was held in the Hungarian county of Veszprem to display the lifestyle and culture of the Hungarian community under the Ottoman Empire. A reenactment also took place with Hungarian actors wearing Ottoman Janissary costumes impersonating Ottoman soldiers and fighting with the Hungarians in front of the Varpalota Fortress. Visitors were offered Turkish coffee as well as traditional Ottoman desserts.

Speaking at the festival, the representative of the Turkish Cyprus in Budapest, Arif Altay, said that locals in Veszprem had the chance to get to know Turkish Cyprus better and continued: "By attending the Ottoman-Hungarian Festival in Veszprem, we also find a place to promote our country and culture as well. We handed out booklets informing people about the tourist activities in our country." He said they have witnessed how much the people of Veszprem admire Ottoman culture and the Ottomans. "It is good that people reenact one of the wars of the period. They are trying to pass their love for the Ottomans down to their children through this festival," he said.

Peter Csepin, the coordinator of the festival, said that the Ottoman Empire ruled in the region for a very long time and added that their aim is to educate people about the lifestyle of the people who lived under Ottoman rule. He said: "There were not only wars and fights between the Ottomans and Hungarians. Hungarians met in the hamams, drank coffee, had tulips and many other new things for the first time during Ottoman rule. Through the festival we held today, we want to display to people two nations who have lived together for many years. Ottoman and Hungarian culture interacted with each other during those long years together."
Last Update: Jun 15, 2015 10:07 pm
RELATED TOPICS