200th anniversary of the battle of Waterloo: Going down memory lane 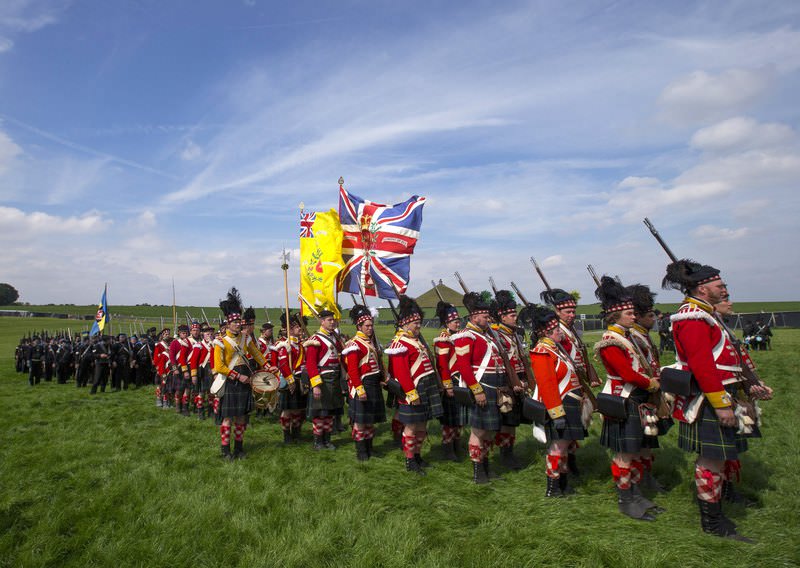 Re-enactors train in the Allied Bivouac camp during the bicentennial celebrations for the Battle of Waterloo in Waterloo, Belgium, June 18, 2015. (Reuters)
by Associated Press Jun 18, 2015 12:00 am
European royals, dignitaries and soldiers commemorated on Thursday the Battle of Waterloo which put an end to the domination of the French Empire led by emperor Napoleon and marked the start of the British century.

Belgium's King Philippe led a ceremony for hundreds of guests Thursday, while thousands of re-enactors gathered under the Lion's Mount monument at the Waterloo battle site. The commemorations took place exactly 200 years after more than 10,000 soldiers died in a half-day battle between French troops and an international coalition led by Britain's Duke of Wellington.

Belgian Prime Minister Charles Michel said "the enemies of yesterday have become staunch allies" and descendants of the top military leaders of that battle joined hands on the very grounds where their ancestors had fired guns and cannons at one another.

Even if royalty and nobility from several of the 1815 belligerents attended the ceremony south of Brussels, France only sent a lower-key delegation and Paris had already strongly objected to the minting of a commemorative Waterloo coin.

Yet one Frenchman on Thursday saw Waterloo as a decisive defeat. Pierre Moscovici, the European Union's financial affairs Commissioner, said the eurogroup meeting of finance ministers needed to keep struggling Greece on board the shared euro currency. "I don't want today's #Eurogroup to be another Waterloo," he said.

And the Le Monde newspaper, too, viewed the battle in the same light, exhorting Britain on Thursday to stay alongside France in the 28-nation EU. "We solemnly say to our friends across the Channel: beware, Brexit could be your Waterloo!"

To Britain, though, Waterloo is nothing but a glorious victory.

Prince Charles came to the battlefield on Wednesday, then was joined by Prime Minister David Cameron at a Waterloo commemorative service Thursday at St. Paul's Cathedral in London. Descendants of those who fought, including the 9th Duke of Wellington, also marked the occasion at a service, which featured readings of extracts offering accounts of the battle.

St. Paul's is the resting place of the first Duke of Wellington.

"This anniversary means a great deal. The battle changed history. Had we not won, we probably would be speaking French now," said Squadron Sergeant Major Tony Gray, 76, of the Light Cavalry.

And at NATO facilities in Kabul, Afghanistan, British and other NATO soldiers also marked one of the most famous battles in history.
Last Update: Jun 18, 2015 8:38 pm
RELATED TOPICS