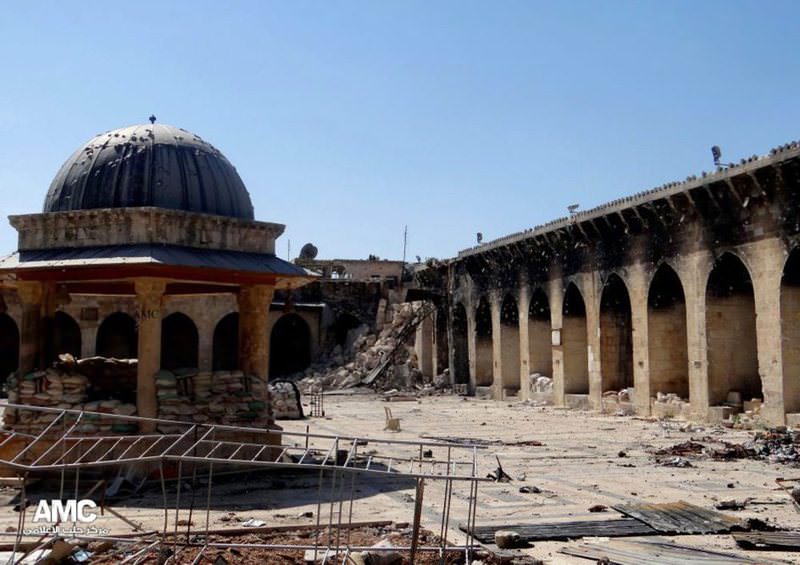 The Umayyad Mosque, a UNESCO World Heritage site, has been seriously damaged during the civil war between President Bashar Assad's regime and anti-government forces.
by Daily Sabah with AA
Jun 26, 2015 12:00 am

Civil wars and domestic clashes in the Middle East, which has been home to some of the most significant civilizations throughout the history of humankind, continue to destroy the rich heritage of countries such as Syria, Iraq and Yemen

Civil wars and domestic problems not only cause the loss of human lives and economic assets, but also the destruction of thousands of years of historical and cultural accumulation as well as historical richness.

Throughout the civil war in Syria, which began in March 2011 and has raged for the last four years, many historical and cultural artifacts of great value have been damaged. Among the damaged historical buildings, historical mosques suffer the most because the clashing groups use them as headquarters.

The Umayyad Mosque, also known as the Great Mosque of Damascus, which is one of Islam's oldest and biggest mosques, was damaged by the regime forces of the Syrian President Bashar al-Assad in 2013. Built in the 8th century and restored in the 13th century, one of the mosque's minarets became unusable due to the attacks. Moreover, the eastern walls of the mosque were brought down following heavy tank and rocket fire by regime forces. While many priceless, hand-written Qurans disappeared, the mosque became unserviceable due to the damage.

Another mosque, the Great Mosque of Aleppo, also known as the Umayyad Mosque of Aleppo, was bombed. The 1,000-year-old minaret of the mosque, which shelters holy Islamic relics, such as the Prophet Muhammad's tooth and a sacred stand from Muhammad's beard, as well as the tomb of Zechariah and a number of unique manuscripts, fell to pieces after the attacks orchestrated by the regime forces.

Some parts of Syria, including Damascus, Bosra, Aleppo, Palmyra, the Fortress of Aleppo and certain historical villages located in the northern parts of the country, are listed on UNESCO's World Heritage List. These world heritage sites mirror the traces of several civilizations that ruled over the region, and now they have been admitted onto the list of "World Heritage Sites in Danger" by UNESCO following four years of civil war. Despite the warnings of experts and art historians, more than 1,000 mosques have been destroyed or damaged since March 2011. Apart from mosques, a large number of tombs, museums, markets and houses have been wrecked.

Located in Syria's Homs province, the Khalid ibn al-Walid Mosque, which is the final resting place of Khalid ibn al-Walid, an Arab military commander who led the Muslim conquest of Syria in the seventh century, was also damaged. The dome and the minaret of the historic mosque were mostly destroyed and the tomb of the great Arabic commander was entirely destroyed.

Considered as one of the most significant fortresses of the medieval age, the Fortress of Aleppo has been turned into a battleground during the Syrian civil war, and the entrance to the fortress was damaged due to shelling. Furthermore, the wall of the Citadel of Salah Ed-Din, which was taken from the Crusaders in 1188 by Saladin, was brought down in ruins following heavy bombing.

Dating back to 3,000 B.C., the Al-Madina Souq in Aleppo has been home to numerous civilizations throughout history. However, following mortar attacks, all of the wooden shops located within the market burned down on Oct. 21, 2014.

The civil war in Syria has also led to the plundering of archaeological sites. UNESCO announced that numerous archaeological sites have been plundered by armed and organized groups, and many historical and archaeological artifacts unearthed from Deir ez-Zor, Aleppo, Daraa, Al-Raqqah and Idlib have been stolen and smuggled outside the country. Recently, the ancient city of Palmyra, which is called the "Rose of the Desert," was badly damaged during clashes between regime forces and the Islamic State of Iraq and al-Sham (ISIS).

ISIS attacked the ancient Assyrian city of Nimrud near Mosul and plundered the historical artifacts. The militants of the terrorist organization also broke the sculptures and priceless artifacts displayed at the Mosul Museum with sledgehammers. The militants attacked the Mosul Library, which features more than 8,000 books, before this incident and set it on fire. The library contained hand-written manuscripts dating back to the Ottoman Empire and the Abbasid Caliphate. Moreover, ISIS also planted explosives around the Hema Kado Mosque that dated back to the Ottoman Empire and destroyed the entire structure.

During the Saudi Arabian-led coalition airstrikes on Yemen, codenamed "Decisive Storm," that was initiated to stop the Houthi forces on March 26, many historical artifacts near the Marib region were destroyed. Also, hand-written manuscripts on the walls of the Ma'rib Dam were destroyed and the National Library of Yemen was wrecked during the armed assaults.
Last Update: Jun 26, 2015 8:44 pm