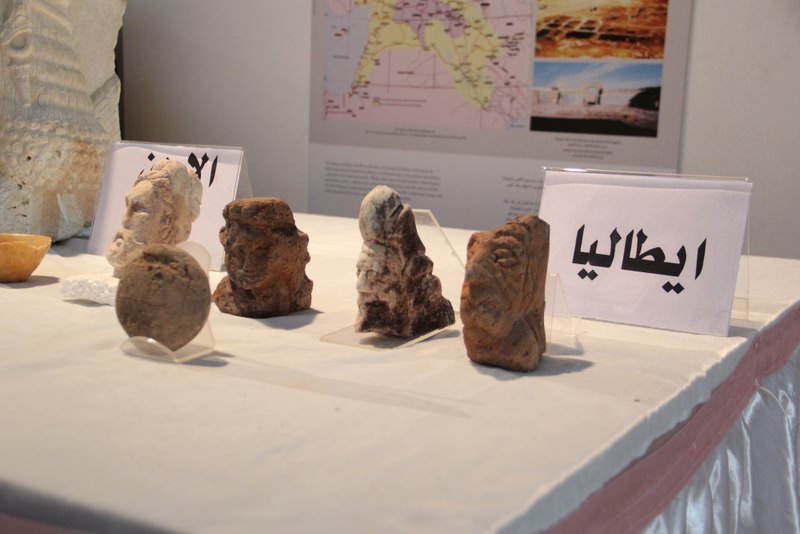 by Anadolu Agency Jul 12, 2015 12:00 am
Iraqi authorities continue to work hard to return historical artifacts that were smuggled out of the country during the occupation of coalition forces and the civil war. The Iraqi minister of tourism and antiquities, Adel Shirshab, reported that 4,300 historical artifacts have been returned to the country.

Speaking at a press conference held at Iraq National Museum, where the returned artifacts are being displayed, Shirshab said many of their historical and cultural heritages were smuggled out of their country. Saying that this issue has become a "national" problem, the Iraqi minister continued, "Iraq's historical treasures have been occupied since the beginning of the previous year. This occupation that has been carried out by the Islamic State of Iraq and al-Sham (ISIS) harms people as well as historical artifacts."

Thanks to the initiatives and collaborations of Iraq's Ministry of Foreign Affairs, the 4,300 artifacts that were smuggled after 2003 were returned to Iraq. "Despite what these terrorists are doing," said Shirshab, "We will conduct the openings of several museums featuring numerous amounts of historical artifacts."

Iraqi Minister of Foreign Affairs Ibrahim al-Jaafari said Iraq is home to some of the world's most important historical artifacts and structures dating back centuries. "While we glorify our history, we do not make our focus point worshiping idols. We are taking lessons from our history. Those who laid their hands on our historical artifacts and structures not only committed a crime against Iraq but against the entire region," said al-Jaafari. Saying that "Iraqi people are fighting with terrorists not only for their own sake but also on the behalf of all nations in the world," al-Jaafari continued, "Those (ISIS) who tried to violate the lands of Mosul belonged to the countries that are considered as the cradle of democracy. The countries that helped to establish democracy in the world and put human rights above everything are incapable of sending their citizens as 'cultural ambassadors' instead of 'terrorism ambassadors.' "

Speaking to Anadolu Agency, Abbas al-Quraishi, the head of Iraq's artifact retrieval department, said the artifacts which are being displayed in the museum belong to different civilizations that have reigned over the lands of present day Iraq, adding that there are also pieces previously featured at the former presidential palace. He said that the artifacts are made of clay, stone, metal and glass. He concluded, "Over 5,000 clay tablets that were taken out from the Nasiriyah province of Iraq will be soon returned to our country."
Last Update: Jul 12, 2015 10:01 pm
RELATED TOPICS