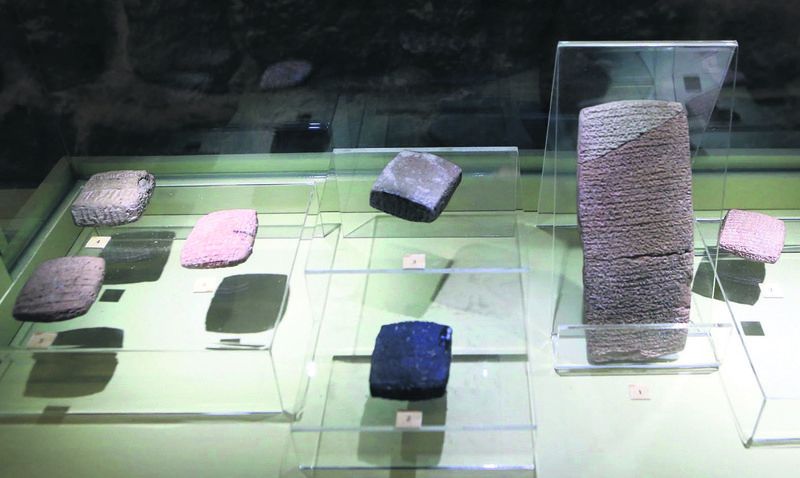 Excavations continuing since 1948 have unearthed 23,500 clay tablets, the oldest written testimonies of Anatolian history, which mention the recognition and protection of women's rights

The Republic of Turkey is established on a naturally and historically prosperous landscape. These lands are home to the first alphabet, cuneiform, the first settlement, Çatalhöyük and the oldest temple, Göbeklitepe. However, these historical treasures are not the only ones. The excavations, continuing since 1948, at the Kültepe-Kanesh-Karum trade colony, located near Kayseri in central Anatolia, have revealed the oldest and the largest archive of private texts in the ancient Near East.

The Kültepe tumulus sits in the middle of the Sarımsaklı Plain, near the foothills of Erciyes Mountain, the highest mountain in the Central Anatolia region. The site has two sections and is 20 meters high and has a diameter of 550 meters. The borders of the lower town surrounding the tumulus have not been positively identified, but they are at least a 2.5 kilometers in diameter. Karum, the mound and the castle located in the middle of the mound were surrounded by thick walls. The houses were mostly two-storied, built in the Anatolian style and close to each other. Research has shown that both areas of the colony were destroyed due to a fire. The unopened envelopes unearthed during the excavations indicate that the fire was sudden.

The excavations at the Kültepe-Kanesh-Karum historical site began in 1948 under the administration of Prof. Dr. Tahsin Özgüç. Following his death in 2005, Prof. Dr. Fikri Kulakoğlu has continued his work on behalf of the Ministry of Culture and Tourism and Ankara University. To date, 23,500 clay tablets and envelopes have been found marking the start of written history in Anatolia. These tablets, written in an old Assyrian dialect with the cuneiform scripture, include detailed information about daily life in the trade colony, such as family affairs, personal relationships, economy and society in general. However, the most interesting topic seems to be "women rights," which is a rare topic to come across in Bronze Age writings.

The ancient city was one of the most enlightened cities of its time, since findings have revealed that a large portion of the population was literate. This was mainly due to the trade relations and policies of the ancient city. The progress of trade is explained in UNESCO's web page with the following words: "King Erishum I launched a series of trade reforms in order to secure the future of his kingdom. He lifted the state monopoly on trade, thereby allowing long-distance commerce to be carried out by private individuals operating within 'family firms.' This in turn led to the creation of a highly complex and wide-reaching trade network between north Mesopotamia and Anatolia during the first quarter of the second millennium B.C. The private archives kept in the Assyrian houses make up the first private libraries of political, commercial and legal documents of ancient Anatolia, affording a uniquely rich source of information for ancient Near Eastern scholarship as a whole." Furthermore, UNESCO states that the population living there was a "cohabitation of local Anatolian and foreign Mesopotamian and Syrian merchants," which "is not seen at any other ancient Near Eastern settlement."

As trade was the center of life in Kanesh, the merchants recorded every single issue, event, problem and progress concerning money. The excavation director Kulakoğlu told Daily Sabah that the records of the merchants are as detailed and varied as a modern company's financial records. The records include every detail about financial issues ranging from the cost of feeding the animals used for transportation to huge sales to foreign buyers.

Thanks to the neat work of Assyrian merchants, it is possible to gain a great deal of information about social life from the tablets. For example, writings about marriage, divorce, inheritance, court cases and adoption, which can be considered as finance-related, are among the records. These issues were closely linked to the rights and the social statute of women in Kanesh. Kulakoğlu explained that "According to the tablets, women's rights where protected and recognized in this ancient city. Women's rights were mainly protected via prenuptial agreements and courts. For example, Assyrian merchants travelling from the capital to Kanesh would marry Anatolian women, so prenuptials were essential in protecting the second wife's and her children's inheritance rights. If women were maltreated, they could go to court, where they were considered equal to men, and fight for their rights." Kulakoğlu also stated that there are some examples among the tablets of women who walked to the capital, which was near where Bagdad is today, from Kanesh, in order to go to the court. Moreover, daughters were entitled to the same portion of inheritance as sons. In business, women were able to participate in trade, and Kulakoğlu said that evidence for this conclusion lies in the fact that women had their own stamps, meaning that they were recognized as individual merchants who possessed property. In this Assyrian civilization, women were important in politics too. Kulakoğlu emphasized that without the empress's signature, political agreements were invalid. Therefore, women's rights are an interesting aspect of life in this trade colony.

Another interesting topic mentioned in the tablets is "protective spells." Kulakoğlu said that some tablets were written in order to avoid evil spirits like talismans and amulets. "Among them, there is a prayer tablet that was written against black magic and the evil eye. The text says humans should protect themselves from the evil eye in order to live a healthy life. Similar phrases are also seen in Turkish like 'kem gözler' or 'kötü gözler' [both refer to the evil eye]," he added. Moreover, Kulakoğlu emphasized the fact that these merchants mostly used magic and prayers with good intentions and that there are only a few examples of black magic.

Other than the tablets, the ancient trade center included art works such as statues depicting gods and goddesses, made from lead, bronze, ivory and silver. Their art was a combination of the local Anatolian people's and the Assyrians'.

Unfortunately, almost one third of the tumulus has been destroyed in such a way that no further research can be done, largely as a result of scientific excavations as well as the illicit digging of local people on the oldest settlements to acquire land. It is possible to find the unearthed tablets in museums in Istanbul, Ankara, Kayseri and other countries.
Last Update: Jul 23, 2015 9:31 pm
RELATED TOPICS