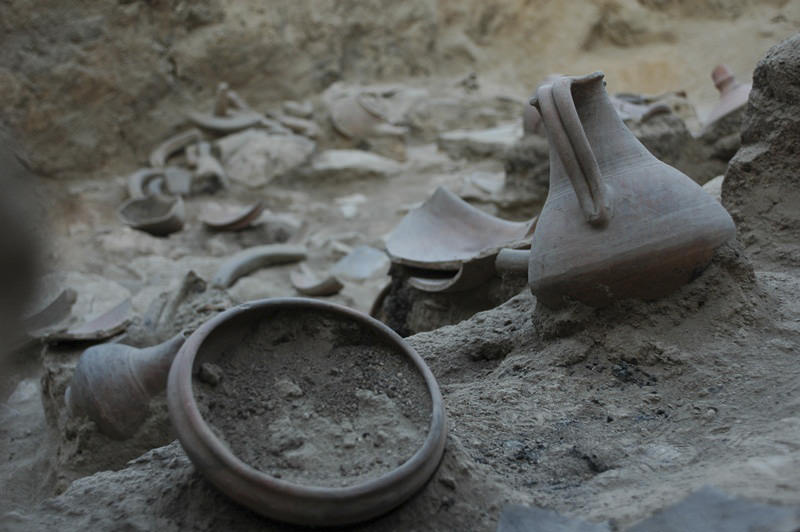 by Anadolu Agency Aug 19, 2015 12:00 am
During recent excavations at the Beycesultan Tumulus in Denizli's Çivril district, archaeologists have discovered a total of 40 cultural layers that continue uninterrupted from the late Chalcolithic period to the Late Bronze Age

Denizli Governor Şükrü Kocatepe visited the site and was informed about the ongoing excavations by the head of the excavations, Professor Eşref Abay of Ege University's Department of Archaeology. Abay said that the Beycesultan Tumulus, which is located in the Upper Menderes Basin, is in a prime strategic location, as it is situated on the natural routes that connect the Aegean coast and the highlands along with central Anatolia and the southern regions. He said they discovered settlements that have not yet entered into the archaeological literature. "Beycesultan Tumulus sheds light on a history going back 5,000 years," Abay said.

During the excavations on the tumulus, the archaeologists found human bones and pottery sherds. Moreover, most parts of the "Burned Palace," which is a huge building dating back to the middle of the Bronze Age, was unearthed. The artifacts unearthed in the tumulus, which harbored various settlements from the early Bronze Age to the Seljuks, have been handed over to the Directorate of Denizli Museum to be displayed. The residential areas, which offer insight into the settlements built in the tumulus, will be covered by a roof. Abay said that more than 100 different settlements that were previously unknown to archaeological literature were discovered during the extensive surface survey conducted between 2003 and 2010.
RELATED TOPICS