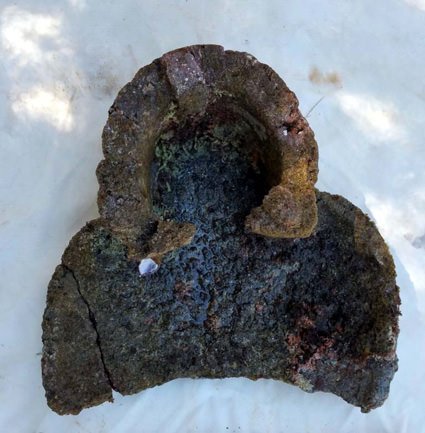 by Daily Sabah Sep 10, 2015 12:00 am
Archaeologists have recently discovered a brazier (a portable oven) on a 2,000-year-old ship during underwater excavations carried out in the ancient city of Knidos. Located in Datça, which is situated between the Aegean and the Mediterranean seas, the ancient city is rumored to be home to astronomer and mathematician Eudoxus, painter Polygnotos and Sostratus, who was the architect of the Lighthouse of Alexandria, one of the Seven Wonders of the Ancient World.

The excavations in the ancient city commenced in 2013 after a long pause. The diggings in the ancient city of Knidos, which dates back 2,600 years, have been carried out with a team of 35 archaeologists under the supervision of Associate Professor Ertekin Doksanaltı of Selçuk University.

Speaking to Anadolu Agency, Doksanaltı said they are trying to bring the ancient city to life once again and stressed that the discoveries made in Knidos are very important for the future of Datça. He said they are undergoing excavation operations in the ancient theater and churches along with the restoration works. The ancient city of Knidos was also a port city back in its heyday and archaeologists are currently trying to find whether there are any other cultural assets near the region through their excavations on the land and around the city as well as under the water. Doksanaltı said Erdoğan Aslan, one of the archaeologists in the excavation team, managed to discover a rare brazier that was made for ships during their underwater excavations near the commercial port.

"The brazier that we recently discovered is a very rare piece. Unlike cylindrical braziers, it is flat, which indicates that it was made especially for ships. Due to swings that occur on ships, the brazier was produced in the most suitable way with cinder storage and legs to place the bowl in order to cook the meal," said Doksanaltı. Following the cleaning, restoration and conservation works of the brazier, the new discovery will be displayed at the Directorate of the Marmaris Museum. Doksanaltı said the famous ports of Knidos are still functional and continued, "Despite all these centuries, Knidos preserves its magnificence with its natural location and buildings. Our findings prove this statement," said Doksanaltı. Saying that the excavations are carried out with the permission of the Ministry of Culture and Tourism and the General Directorate of Museums, Doksanaltı thanked the authorities for letting them continue the excavations in the ancient city of Knidos.
RELATED TOPICS