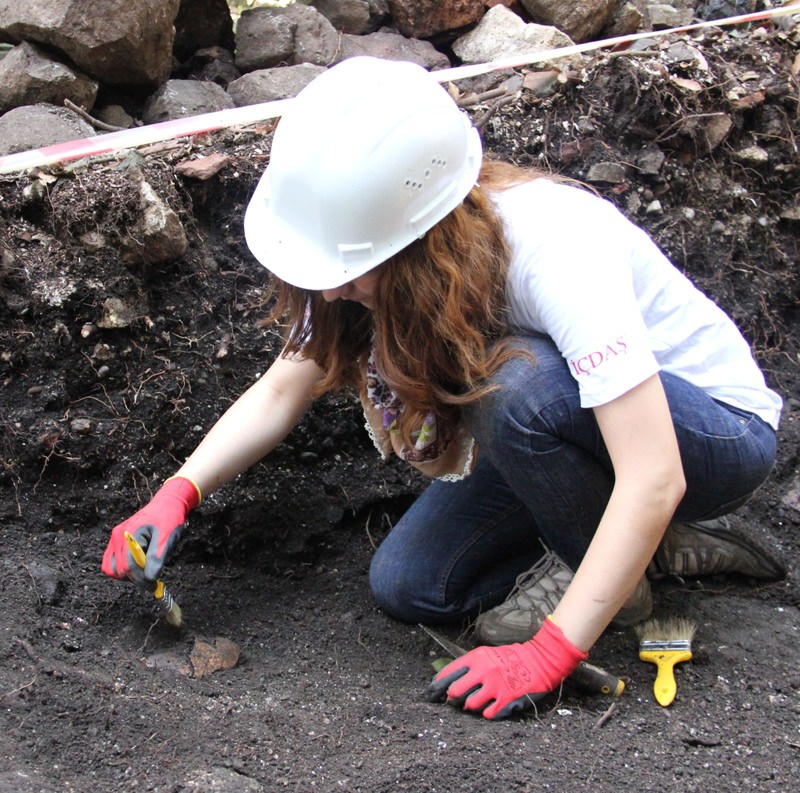 Excavations have revealed Byzantine-era structures on Giresun Island, located 1.2 kilometers off Turkey's Black Sea coast. While a chapel, jars, coins and many other artifacts have been unearthed, archaeologists hope to find Roman ruins in lower layers

Byzantine-era archaeological findings have been discovered on Giresun Island, a small island about 1 kilometer off the coast of the northeastern city of Giresun, as part of the excavations that started this month. Archaeologists uncovered a Byzantine-era chapel and pitos, a storage area in the shape of giant jar, along with other artifacts including Byzantine-era coins.

The ruins of a monastery were discovered in the area, and it also features a cistern and the ruins of a tower. Speaking to Anadolu Agency (AA), Hulusi Güleç, the deputy manager of the Provincial Culture and Tourism Directorate, said the excavations are continuing around a newly discovered small chapel. He added that some archaeologists are working on the area where the pitos were found. "We will conduct excavations in two more places. They will start after the current ones wrap up. Archaeologists will also excavate the ruins of a cistern located on the western part of the island," he said, adding that there is a tower-like structure dating back to the Byzantine period. "We will work on this structure as well to learn more details about the historical periods of the island," he said. Güleç stressed that Byzantine-era cultural patterns are continuously found in the area. "If we find other sub-layers, we could reveal Roman-era findings, too," he said.

One of the excavation team members, Assistant Professor Gazanfer İltar of Celal Bayar University's Department of Art History, said the island has been continuously inhabited without interruption since the third century B.C. "The remains largely date back to the Byzantine-era. So far, the team has found the ruins of a chapel, a cistern, large jars, a cemetery area, a monastery and a basilica-like church," İltar said. He underscored that they are planning to excavate the island for almost five years. When the excavations complete, the island will be designed as an archaeology park and turned into a center of attraction. İltar said the island has a religious nature: "The island was established as a monastery complex with religious structures. Around 50 students lived there with a religious trainer. The big jars were used to store food, oil and wine; there are sufficient amount of them. We found three jars so far, but we think more will be discovered on other parts of the island, as more food and other items than was necessary were found for 50 people."

Researching efforts about Byzantine history in Turkey have been increasing especially in recent years. In order to serve that purpose, Istanbul's Boğaziçi University founded a new Byzantine Studies Practice and Research Center in July to contribute scholarship on the Byzantine Empire and operate as a hub for this field of study. As the first center established in a state university, the center will shed light on the history of Anatolia, the Balkans, Istanbul and the Ottoman Empire during the middle ages with projects on Byzantine history, culture and archaeology.

Giresun Island is a small, 10-acre island located 1.2 kilometers from the Black Sea province of Giresun on the southeastern coast of the Black Sea. It is the biggest island on the Turkish Black Sea coast.

In the sixth or fifth century B.C., the island was used by ancient Greek colonists from the city of Kerasous (presently Giresun). Several names were given to the island by the Greeks, including Ares, Nesos and Puga.

The Romans established a walled settlement with towers on the island to defend against pirate raids on the dual-province of Pontus and Bithynia in the first century A.D. In the middle of the Byzantine era – around the fifth-to-sixth centuries – a monastery was constructed on the island. J. Philipp Fallmerayer, an Austrian traveler, journalist, politician and historian who visited the island in 1840, reported that the ruined monastery was dedicated to St. Phocas of Sinope.

The island has been preserved as a historical and natural site for many years, thus developers have not been able to create residential areas. Tourism agencies in Giresun provide tourists with small and medium-sized boats who want to visit to the island.
Last Update: Sep 17, 2015 1:59 am
RELATED TOPICS