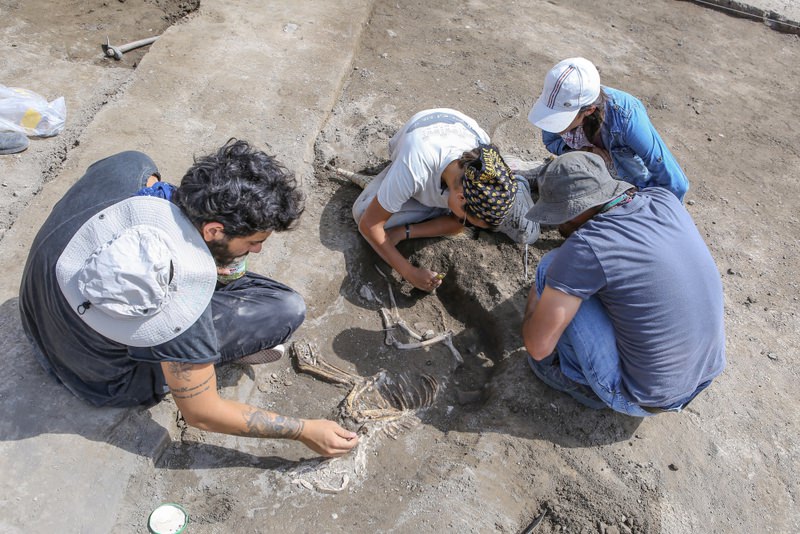 by Anadolu Agency Sep 29, 2015 12:00 am
A dog's skeleton dating back 3,000 years has been discovered under a house during excavations carried out in Tuşba, the capital city of the ancient kingdom of Urartu. The new discoveries unearthed offer insights into the reign of the Urartu as well as what daily life was like back then. The dig was performed under the supervision of Associate Professor Erkan Konya of Istanbul University with the permission of Turkey's Ministry of Culture and Tourism.

The newest discovery, a 3,000-year-old dog skeleton that has been found in a tumulus in the archeological site, surprised the team of archeologists who have been excavating historical sites around Van Fortress for the last six years.

Speaking to an Anadolu Agency (AA) correspondent, Associate Professor Konyar said they have been trying to find the civil architecture of the Urartu, which is located in the lower side of the city, for a month. He said that the area is believed to be the district where common people resided and sheltered the wealthy. He expressed his surprise when he was talking about the newly discovered dog skeleton and said, "We came across similar discoveries in Yonca Hill excavations and the necropolis in the Van basin; however, this new discovery is very interesting and extraordinary. Owners of the house buried the dog within their living space which indicates that people of Urartu were animal lovers." He said that Urartian people were practicing ovine breeding and probably cared dearly about their dogs. "Perhaps dogs were very valuable and that is why it was buried inside the house," said Konyar.

Konyar said that they discovered such animal remains during the excavations in the necropolis area but highlighted that this is the first time they discovered a dog's grave inside a residence. "The skeleton probably belongs to a sheepdog. We already know the link between sheepdogs and Urartian people thanks to the findings we unearthed in the necropolis excavations. However, this new discovery points out a more emotional attachment to dogs. This relationship is very impressive for social structure and daily lives," Konyar concluded.
RELATED TOPICS