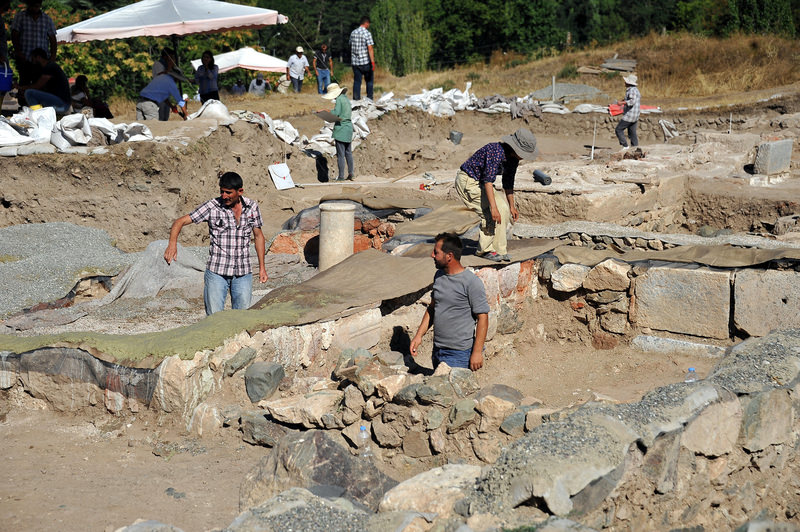 The archeological team working under the supervision of Professor Burcu Erciyas of Middle East Technical University in the ancient city of Comana Pontica.
by Anadolu Agency Sep 29, 2015 12:00 am

Situated in the Black Sea city of Tokat, the ancient city of Comana Pontika was home to different civilization over the centuries including the wealthy Seljuk-era beylik Danishmends

The excavations in Comana Pontica, which is an ancient city located in Gümenek, 7 kilometers from the central Black Sea city of Tokat, indicate that a wealthy Seljuk or Danishmend community once lived in the area. Speaking to Anadolu Agency (AA), the head of the excavations, Professor Burcu Erciyas of Middle East Technical University, said the 2015 excavation season has completed after 45 days of intense archaeological excavations.

"It has been a very fruitful excavation season," Erciyas said. The excavation team managed to entirely unearth both churches that had been discovered and were able to determine the construction dates, as they had planned before the season. The two churches that were discovered in Comana Pontica date back to the 10th or 11th centuries. This excavation season, the archaeologist also worked on the remainder of the Danishmends, which dates back to the 12th century. According to information provided by Erciyas, the findings indicate that a wealthy community lived here during the reign of the Danishmends and the Seljuks.

"In particular, the variety of ceramic works, the patterns and the technique used in the pottery, glass work and coins indicate that Comana was a very wealthy city and it a center of trade and industry," Erciyas said. The artifacts discovered from the ruins of workshops showed that the city produced artifacts from metal, glass, bone and ceramic. "Although we discovered the remnants of ceramic production, we have not unearthed the oven yet. I believe that we need to work toward the north. We now know that the ovens are located near the workshops," Erciyas said.

Erciyas also highlighted that the ancient city of Comana is also home to Ottoman-era houses. "We continue to unearth the plans of the Ottoman-era houses. This excavation season, we discovered a statue belonging to the Roman era. The new discoveries indicate that this area was densely populated by the Romans from the first century to the third century. The variety of ceramic artwork unearthed in the ancient city also gives us insights about its Roman period," Erciyas added.

Erciyas said the team discovered additional information on which business lines the ancient settlers engaged in as well. "Ancient settlers had different businesses. Anthropological studies on Byzantine-era bones show that the public engaged in agriculture. Zoological and botanical findings dating back to the Danishmends also show that the local people earned their living from agriculture. They had a wide-range of fruit, nuts, dried fruits and cereals. The findings reveal comprehensive details on their handcraft and artisanship as well," she said.

Comana Pontica, which was an important cultural center at the time of the Mithridates and sustained its autonomy at the time of the Roman Empire, is considered a holy site dedicated to the Anatolian god Ma'ya. The region was also a trade center that drew many visitors from Anatolia with its festivals, rich bazaar and fertile land. Supported by Middle East Technical University and TÜBİTAK, the Comana Pontica Archaeological Research Project was launched in 2004 in order to understand the urban pattern of the antique city as well as its location. Following surface research in Gümenek's Hamamtepe area, excavations were started in order to reveal the ancient city.
RELATED TOPICS