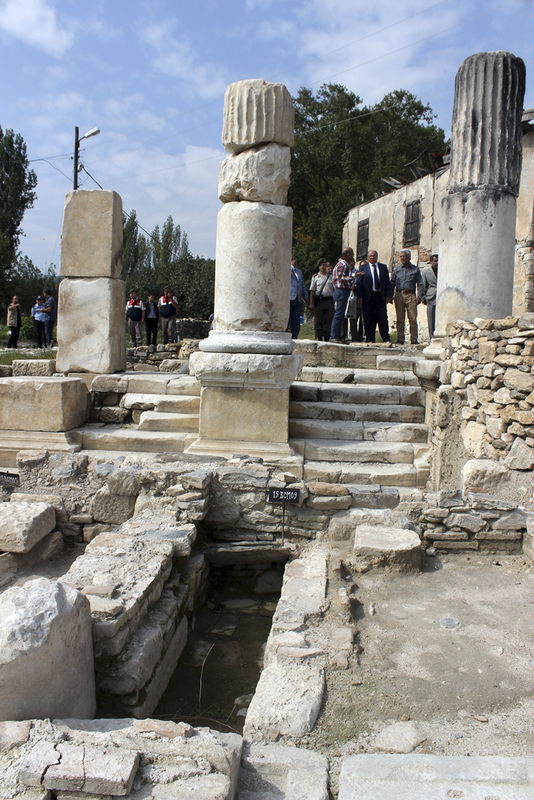 by Anadolu Agency Oct 08, 2015 12:00 am
Eight scientists from Muğla Sıtkı Koçman, Sakarya and Pamukkale universities are conducting research concerning the route from Bozüyük to Marmaris that Suleiman the Magnificent followed in 1522 during his Rhodes campaign. In their six-month timeframe, the topographic structure and plant diversity of the route as well as accommodation sites, mosques and other historical buildings on the route are to be investigated. Recently, the scientists informed Muğla Governor Amir Çiçek about the work they have done and the maps they have drawn.

Speaking to the press, Çiçek said that scientists have discovered the route from Bozüyük to Marmaris that Ottoman Sultan Suleiman the Magnificent used during his campaign against Rhodes. "Currently, the route that Sultan Suleiman used in present day Muğla is being studied. This research will include the study of the life of the soldiers, what they ate during the campaign and the social state of the local people. We will introduce this site to tourism for its cultural and historical aspects to be recognized and passed on to future generations," said Çiçek at the press conference.

The study will be presented to the Muğla governorate in the upcoming days, and the governorate will immediately begin working on a book project. Highlighting that they want to promote this site to the public via a documentary, Çiçek said their aim is to turn this route into living history. "We aim to make new generations know this route and introduce it to tourism. We will unveil the notions of justice and tolerance that the Ottomans had as well as people's perceptions of the state, soldiers and the sultan," said Çiçek.

Associate Professor Adnan Çevik said that Suleiman the Magnificent went on the Rhodes campaign just after he conquered Belgrade. Çevik said that their aim is to determine the Muğla route and lay out the scientific infrastructure of the route. "We want to portray the Muğla of the 16th century and unveil the flora, topography, geography, art history, archaeology, people and the lifestyle of 500 years ago," he added.

He said that they are in possession of a diary about Sultan Suleiman's Rhodes campaign. According to Çevik, the diary has day-by-day entries about the campaign, including how the sultan prepared, where he stopped and which route he followed. He also said that the book on the conquests of Sultan Suleiman that was written by one of his close associates, Celalzade, includes information about the Rhodes campaign. "Apart from that, this book offers us insights about Evliya Çelebi's route as well," concluded Çevik.
RELATED TOPICS