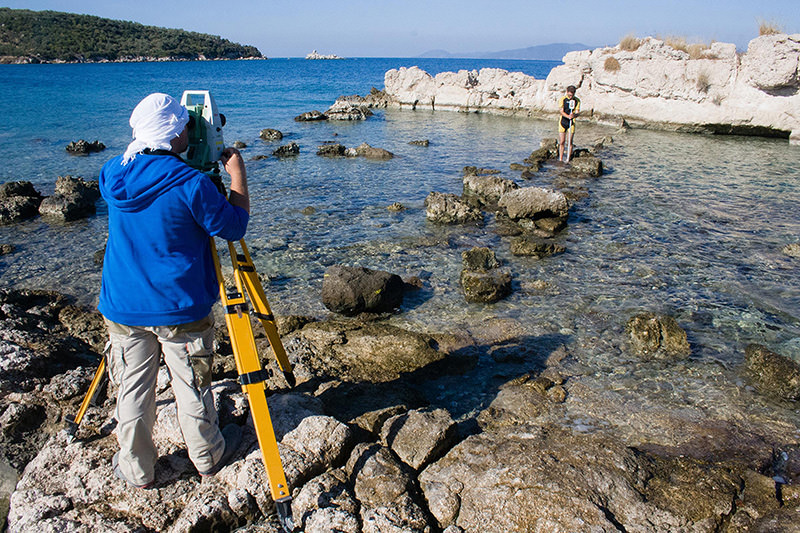 by Daily Sabah with DHA Nov 11, 2015 12:00 am
The third "lost" island of Arginusae mentioned in old scripts, where a major naval battle of the Peloponnesian War took place, was found through the detailed work of geoarchaeologists in a village near the resort town of Dikili located in the western Izmir province.

According to the article of Doğan News Agency, the surface research carried out in Bademli village proved that one of the peninsulas in the area was an island in antique age and was later connected to mainland by an isthmus formed through alluvial deposits.

The discovery was the outcome of a larger research examining the harbors of Karadağ Peninsula carried out by geoarchaeologists from German Archaeological Institute (DAI) and University of Cologne along with archaeologists, antiquity historians, geographers, land surveyors and geophysicists from universities in Izmir, Manisa, Karlsruhe, Munich, Kiel, Rostock and Southampton.

"However it was a matter of debate that the islands in the region were Arginusae Islands. Through borehole samples, it was understood that antique Kane city was located over an island," Pirson said.

Güler Ateş, an assistant professor from Celal Bayar University, said that the research over the connection of harbors located in the peninsula resulted in locating the third lost island and the characteristics of Kane's harbors.

"It is understood that this place serves as intermediary stop among important routes between Lesbos and Edremit (Adramytteion) in the north and Pergamon's (Bergama) main harbor of Elaia (Zeytindağ) in the south," Ateş said.

The famous naval Battle of Arginusae was fought between Athens and Sparta in B.C. 406 and it was one of the last major battles of the Peloponnessian War. Despite the Athenian victory, six out of eight commanders of the fleet were executed as they failed to rescue their wounded sailors and damaged ships.

Kane is also known as the harbor that the Roman fleet dispatched to conquer Anatolia from their bitter rival Antiochus III the Great of the Seleucid Empire chose to spend the winter of B.C. 191-190.