Ancient Mosaics at the Great Palace Museum to be restored 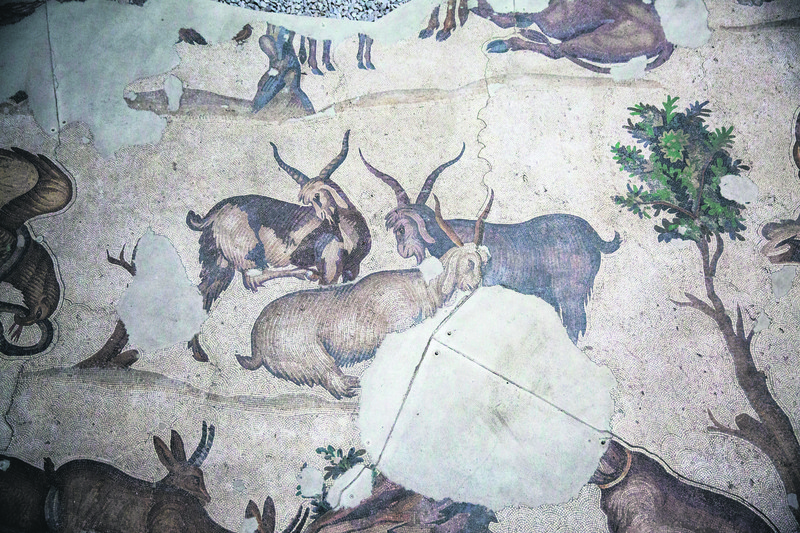 Dating back 1,500 years, the mosaics of the Great Palace of Constantinople, which were discovered in 1932, will finally undergo detailed restoration for better preservation and display

Multiple 15,000-year-old mosaics discovered on the floors of the Byzantine Empire's Great Palace of Constantinople in 1932 will undergo conservation work for the first time in 28 years. The work will be carried out by experts from the Istanbul Restoration and Conservation Laboratory. As a part of the project, the Great Palace Mosaic Museum, which displays the mosaics, will be restored for a modern exhibition.

Speaking to Anadolu Agency, Harullah Cengiz, the director of Hagia Sophia Museum with which the Great Palace Mosaic Museum is affiliated said the Grand Palace mosaics are the first and only historical artifacts that are being displayed at the site where they were originally discovered. The museum welcomes about 100,000 tourists annually, and that number increases every year, indicating how much the museum is recognized at home and abroad.

Commenting on the museum, which opened its doors in 1987, Cengiz said, "The museum was built according to the museology of the period. As the years have passed, the exhibition areas of the museum have become worn down." The museum directorship has already prepared a restoration project for the museum. The conservation board for the restoration approved the project recently and we are planning on undertaking the work in 2016. According to Cengiz, once the museum's restoration is over the Great Palace Mosaic Museum will be a more successful museum.

The biggest problem that the mosaic restorers will face during the conservation and restoration works is that the experts of the 1950s used cement mortar as a binder. Today, experts avoid cement as it contains resolvable salts and causes damage to tesserae. Since all the mosaic panels in the museum have cement in them, the experts from the Istanbul Restoration and Conservation Laboratory will have to evaluate the situation and decide whether to leave the cement binders or not. Moreover, they will analyze the resolvable salts to get a clear understanding of what damage they have caused. Avşar said they believe that the salts melted away years ago; however they will carry out various tests to confirm. "Following the tests, we will make aesthetic touches to the mosaics. The mosaics will look unified with the panels once the cement is cleared," he added.


The mosaics were brought to light in the 1930s. They were restored in the 1950s and transferred to the museum for conservation and display. The biggest problem that the mosaic restorers will face is that the experts of the 1950s used cement mortar as a binder. Today, experts avoid cement as it contains resolvable salts and causes damage to tesserae.

Documenting the work carried out at the museum is as important as the restoration and conservation work. The documentation that will be done is essential in passing down all of the work to future generations. Avşar said the aim of the project is to preserve the historical buildings and artifacts. "The conservation work is not about changing the historical quality and the aesthetic of the artifacts," said Avşar.

The Grand Palace Mosaic Museum features over 100 mosaics belonging to the Byzantine period. The conservation and restoration project is expected to last for two years and the museum will be closed to the public during the project. The mosaics, which date back to 450-550 B.C., are currently being displayed at Arasta Market within the Blue Mosque Külliyesi (social complex). The mosaics are also considered to be important artifacts due to their artistic quality and the richness of their descriptive scenes. The mosaics were crafted by the prominent artists of the period on the floors of the Great Palace of Constantinople upon the orders of Roman Emperor Constantine the Great.

During the excavations carried out between 1932 and 1935, 250 square meters of mosaics made of lime stone, terra-cotta and colored stones were unearthed. The historical artifacts were restored in the 1950s and brought to the Grand Palace Mosaics Museum for protection. The mosaics are inspired from daily life, nature and mythology and feature such scenes as a griffin eating a lizard, a fight between an elephant and lion, a horse feeding its baby, children herding geese, a man milking a goat, a child feeding a donkey, a young girl carrying a pot, bears eating apples and the struggle between a hunter and tiger. The mosaics that are being displayed at the Grand Palace Mosaic Museum portray 90 different scenes with 150 different human and animal figures. The mosaics stand out with their "Opus vermiculatum" style and are the largest landscape portraits from Late Antiquity.
Last Update: Nov 26, 2015 6:34 pm
RELATED TOPICS