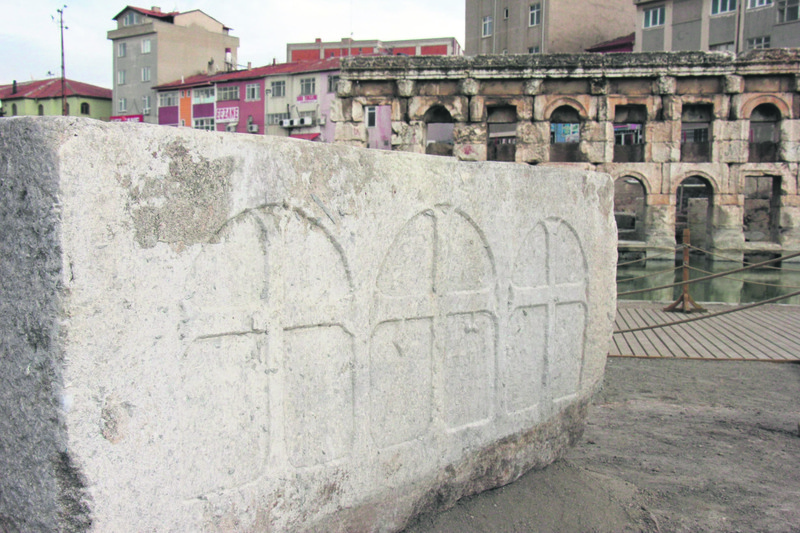 by Anadolu Agency Dec 05, 2015 12:00 am
A marble tomb that was taken under protection by a local from Yozgat's Sarıkaya district 30 years ago has been moved to the excavation site of a Roman bath in the region. Mustafa Doğan, 64, discovered a marble tomb while digging for his house's foundations 30 years ago. The tomb, dating back 1,500 years, was taken under Doğan's protection in his garden. After the Sarıkaya local alerted the authorities, the marble tomb was transferred to the Roman bath excavation site in Yozgat by officials from Yozgat Museum. Speaking to Anadolu Agency, Doğan said he found the tomb while building his house 30 years ago. He claimed that he did everything he could to protect the originality of the marble tomb. "At last, we called the Directorate of Yozgat Museum. The authorities came and studied the tomb. They told me that it would be great to display the tomb at the excavation site of the Roman bath in the region and tourists can easily see the marble tomb there. We looked after the tomb for 30 years; I even covered it with blankets to protect it from the rain. We doted over it," Doğan said.

Sarıkaya was a late-Roman era city called Basilica Therma. Apart from various Roman-era remains, several written documents were unearthed during the excavations. The historical Roman bath is one of the rare still-standing late-Roman buildings in the region. The excavations in the Roman bath have been continuing for six years and the archeologists managed to unveil a total of three thermal pools.

The director of Yozgat Museum, archeologist Hasan Kerim Şenyurt, said that they received a request from Doğan to display the tomb in a better place. "They asked us to move the tomb to a place where we can show it to other people and protect it better. Upon this request, we traveled to the district and studied the tomb," said Şenyurt. The marble tomb is 1,500 years old and it belongs to the late-Roman period, also known as Christian Imperium Rome. The city named Basilica Therma was a bishopric and the tomb is believed to have belonged to one of the early-period Christian men of cloth. It is claimed that when the marble tomb was discovered, the cover of it was missing and the tomb was empty. The reliefs of three crosses on the tomb suggest that it belongs to the early years of Christianity.
RELATED TOPICS