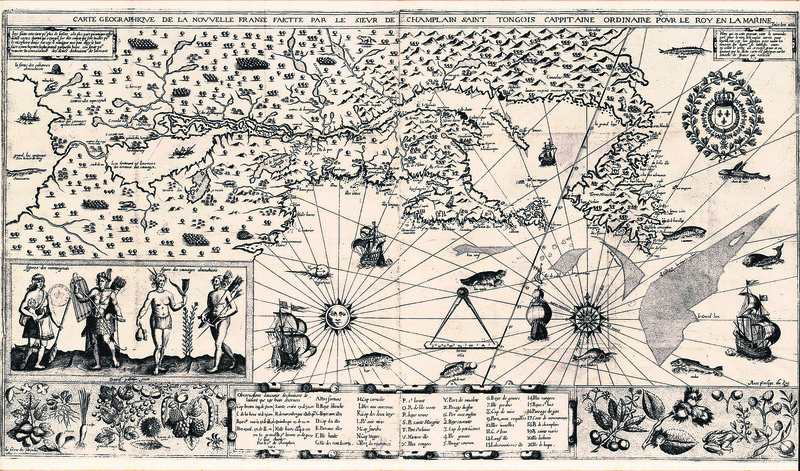 by Associated Press Dec 08, 2015 12:00 am
A centuries-old map compiled by French explorer Samuel de Champlain and believed to be among dozens stolen more than a decade ago from the Boston Public Library has been recovered, library officials said Friday. The map, compiled in 1612 and named Carte Geographique de Nouvelle France, was found at a New York City arts dealer, where it was on sale for $285,000, the library said. ıt was identified by Ronald Grim, curator of the library's Norman B. Leventhal Map Center, who spotted it in an antiques publication over the summer. "I was stunned to come across the map, and thrilled to determine it indeed belongs to the Boston Public Library," Grim said in a statement. "I'm proud it's been returned to its rightful home." The 17-inch-by-30-inch (43-centimeter-by-76-centimeters) map depicts the coast of New England and the Canadian maritime provinces and an area as far west as the Great Lakes, part of a region once known as New France. Champlain made numerous voyages to the region in the early 17th century and included the map in a book published in Paris in 1613.

Grim, shortly after joining the staff in 2005, began an inventory of the library's rare map collection and discovered that 69 were missing from atlases and books. The inventory was prompted, the library said, by the arrest of E. Forbes Smiley III, an antique map dealer who was arrested in June 2005 on charges of stealing maps from Yale University.

In 2006, Smiley was sentenced in federal court in New Haven, Connecticut, to 3 1/2 years in prison after admitting he stole about 100 maps from several institutions including the New York and Boston public libraries, the Newberry Library in Chicago, the Yale and Harvard University libraries and the British Library in London. Authorities said at the time that Smiley helped investigators recover many of the maps, stolen over eight years, including 34 that were returned to the Boston library. Federal prosecutors cited his cooperation in proposing a reduced sentence. The Champlain engraving was not among the maps that Smiley admitted taking. The library did not identify the New York antique dealer that was selling the map, but it said the dealer had been retained by a third party to sell it on commission and fully cooperated with the recovery. To confirm the identity of the map, Grim said he compared it with a digital image taken from a previous photograph. The document had distinctive markings, including tears on the left side and a hole just above one tear.
RELATED TOPICS