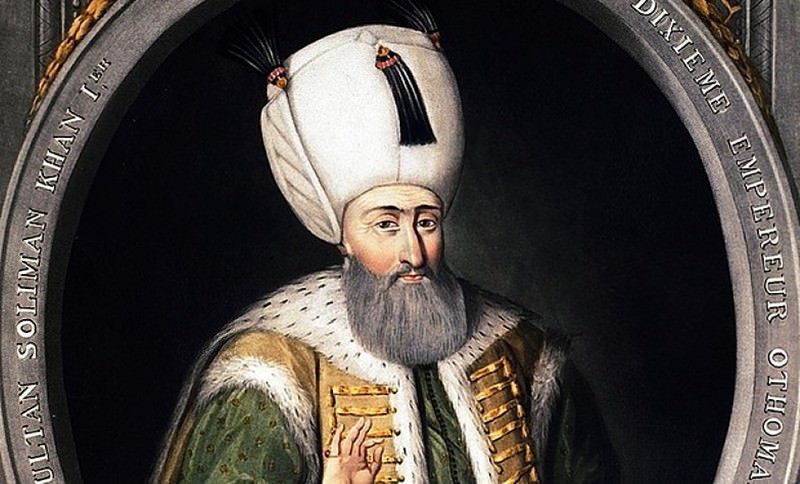 by Daily Sabah with Agencies Dec 10, 2015 12:00 am
The remains of the tomb of Suleiman the Magnificent, who died in 1566 while his troops were besieging the fortress of Szigetvar in southern Hungary, have "in all likelihood" been found, a Hungarian historian said on Wednesday.

Norbert Pap said the tomb is believed to have been built over the spot where Suleiman's tent stood and where he died. Pap, head of the department of Political Geography, Regional and Development Studies at the University of Pecs in Hungary, said objects suggesting it was Suleiman's tomb were found during the dig, as well as other historical evidence, although more excavations are needed to confirm the find.

"We have data which all points in the same direction," Pap said at a presentation of the latest findings. "That is why we say 'in all certainty,' because there is no sign pointing in another direction. But more confirmation is needed, as this is a very delicate topic."

Until his death at age 71, Suleiman was the Ottoman Empire's longest-ruling sultan. The Turks greatly expanded their dominance in the Balkans, the Middle East and northern Africa during his 46-year reign.

What is believed to be the sultan's tomb is located in the former Ottoman settlement of Turbek, which was destroyed in the 1680s. The settlement's discovery was announced by Pap in 2013.

Historians believe Suleiman's heart and internal organs were buried in the tomb and his body taken back to Constantinople, as Istanbul was then known. His death at Szigetvar was kept secret for 48 days to prevent his troops from giving up the fight.

Pap said some other structures near the tomb, all still underground, are likely to be a small mosque and a dervish monastery. He said excavation work at the site would restart in April.

The site near Szigetvar, which was under siege by Suleiman's Ottoman army when he died, includes a "sultan-like structure", researchers said at a news conference in Budapest.

"Hexagonal structures found during the excavation proves that this site is a sultan-like structure," Ali Uzay Peker, a Turkish academic from Middle East Technical University's architecture department, said. "The mosque and the shrine were built side by side. The fact that a minaret could not be found during the first excavation indicates that this is a shrine. At this stage we can say that we found the site of Suleiman's shrine."

Suleiman was the longest reigning sultan of the Ottoman Empire and presided over its golden age for 46 years. As well as military conquests in Europe, the Middle East and North Africa, he instituted major legislative reforms and was a keen patron of the arts and technology.

"Evliya Çelebi, who visited the region in 1664, states that a shrine, mosque and Ottoman compound were in the region," Pap said, outlining the evidence for naming the site as Suleiman's tomb. "A Hungarian noble also painted the monuments in the region around the same time. According to a scientific study we conducted based on these two pieces of information, we detected a compound belonging to the Ottoman era as well as the site where Suleiman the Magnificent's internal organs were buried."

What is thought to be the sultan's tomb is located in a former Ottoman settlement that was destroyed in the 1680s and rediscovered in 2013.
It is believed Suleiman's organs were buried in Hungary and his body taken back to his capital, where it is still entombed at the Suleymaniye Mosque, one of Istanbul's best-known sights.

Turkish Deputy Prime Minister Yalçın Akdoğan said the discovery was "important for us spiritually, just as important as the discovery of other Ottoman monuments in the region."

He said the search for Suleiman's remains had been going on for the last 120 years and pledged the government's continued support for the project.