Algeria Palace reminder of the last Ottoman ruler in Constantine 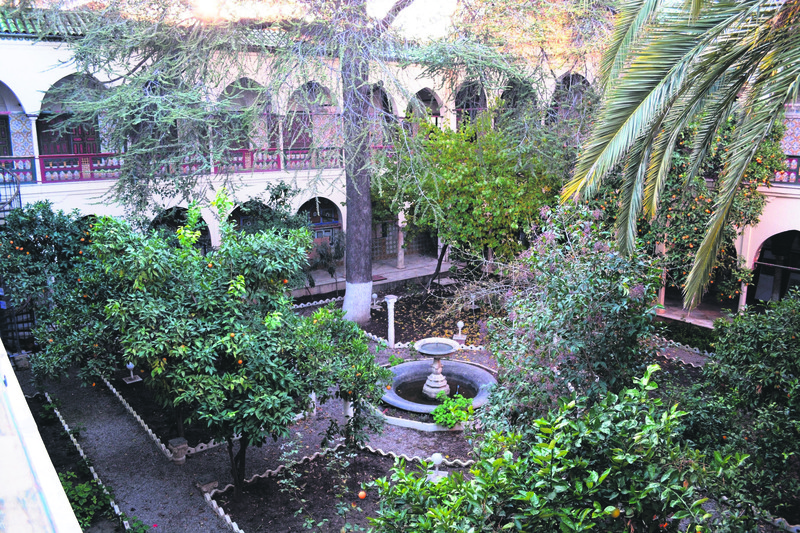 The Ottoman palace features a huge garden with an ornamental pool and various types of trees as well as a second garden with 27 different corridors that have a cooling effect on hot summer days.
by Daily Sabah Dec 19, 2015 12:00 am

The Palace of Ahmet Bey in Constantine, Algeria stands as a reminder of its Ottoman past. Built between 1825 and 1835, the palace of the last Ottoman bey in the area features traces of Ottoman architecture

Located in Constantine, Algeria, the Palace of Ahmed Bey holds traces of the victories of the Ottoman Empire and the valor of the last Bey of Constantine, Ahmed Bey ben Mohamed Cherif. The palace was built between 1825 and 1835 and extends over 5,600 square meters, reflecting the time when he ruled the city.

Speaking to Anadolu Agency (AA), Halefullah Sadiye said the palace is one of the most unique historical buildings in Algeria and mirrors the successes of Islamic civilization as well as the last Ottoman Bey of Constantine. According to Sadiye, the expert builders and artisans of the time who built the palace were inspired by European architecture. The Ottoman palace features a huge garden with an ornamental pool and various types of trees as well as a second garden with 27 different corridors that have a cooling effect on the garden on hot summer days.

The palace, considered the center of the eastern Beylik, features numerous corridors decorated with a total of 250 marble columns that were brought from all over the world. The palace stands out with 121 chambers, 60 windows and a 2,300-square-meter wooden ceiling that was decorated with Islamic motifs.

The Palace of Ahmed Bey has an administrative section called the "Bey Council," which consists of two court chambers that conducted rulings according to the Hanafi and Maliki sects of Islam. In addition, the palace features bath chambers in its harem. The ground floor of the palace is where a small chamber was created for Ahmed Bey and his family to spend the winters, which was also used as a dungeon during the French occupation while the French officers used the top floors for accommodation.

More than 2,000 square meters of palace walls were decorated with paintings depicting Ahmed Bey's travels to Alexandria, Tripoli and Algeria, as well as 15 months of travel to Istanbul, Cairo and Hijaz in 1818 and 1819 in addition to other travels before and after his reign as Bey of Constantine. According to Sadiye, the palace mural features a total of 36 sailboats, 66 frigates 78 different types of trees, hundreds of houses, 69 minarets, 55 dome figures, 23 readable phrases and sentences, four palaces, seven windmills, birds and various geometrical shapes unique to Islam and eastern culture.

Sadiye stressed that some of these ornaments were destroyed by the French during their occupation of Constantine in 1837. He also said the palace's architecture went through some changes but that various restoration projects are underway to restore the ancient architecture back to its original state. The palace is considered one of the most important symbols of Constantine and was closed for a long time for restoration. Since its inauguration, the Palace of Ahmed Bey has welcomed a vast number of tourists and continues to host various cultural organizations.
RELATED TOPICS