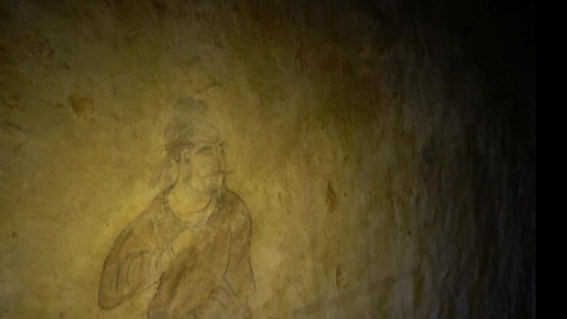 by Daily Sabah with AA May 17, 2016 12:00 am
Plans are now underway to transform an ancient Göktürk burial ground. The kurgan, a burial mound erected over a burial chamber often made of wood, will be converted into a museum Located in the Bulgan region of Mongolia, 210 kilometers away from the capital Ulaanbaatar in the foothills of the Bogd Khan Uul Mountain, the kurgan dates to the time of Göktürk Khanate, which ruled parts of Inner Asia between 552 and 745.

To protect the building's history, the Turkish Cooperation and Coordination Agency (TİKA) along with Mongolian authorities have signed a deal to convert the kurgan into a museum. TİKA's Ulaanbaatar coordinator Veysel Çiftçi offered insights about the Turkic art that blossomed in the region 1,500 years ago. He said that the murals inside the kurgan are one of a kind, adding that they should be preserved in their original location to protect their authenticity. To achieve this, the murals will be restored and placed in their original spots once the kurgan's transformation has been completed. Noting that TİKA aims to protect the cultural and national heritage of the historical Turkic people in Mongolia to allow their history to be passed down to future generations, Çiftçi said that the structure of the kurgan will be reinforced and the murals will be preserved behind glass, with precautionary measures against environmental factors.

The kurgan was discovered during excavations led by Mongolian and Kazakh archeologists in 2011, but there is no record of who the kurgan belonged to. The Göktürks were a nomadic confederation of Turkic peoples in medieval Inner Asia. The Göktürks, under the leadership of Bumin Qaghan and his sons, succeeded the Rouran Khaganate as the main power in the region and established the Turkic Khaganate, one of several nomadic dynasties which would shape the future geolocation, culture, and dominant beliefs of Turkic peoples. The Göktürks' practiced a religion called Tengrianism, named after the chief god Tengri, and claimed divine power given to them. They built temples and prayed high on hills close to the sky.
RELATED TOPICS