Dagger in Egyptian Pharaoh Tutankhamun's grave made from meteoric iron 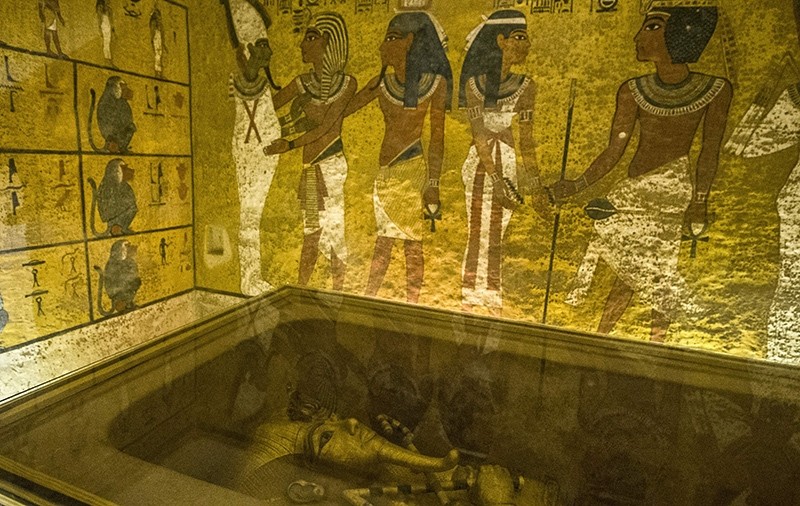 his file photo taken on November 28, 2015 shows the golden sarcophagus of the ancient Egyptian Pharaoh Tutankhamen displayed in his burial chamber in in the Valley of the Kings (AFP Photo)
by Jun 02, 2016 12:00 am

Scientific analysis of Tutankhamun's 3,300-year-old daggers found buried with him "strongly supports" a theory it was made of meteoric iron, according to a new study.

"Our study confirms that ancient Egyptians attributed great value to meteoritic iron for the production of precious objects," said the Italian and Egyptian scientists who performed X-ray analysis of the dagger, which took place at the Egyptian Museum in Cairo.

Tutankhamun died aged 19 in 1324 BC after just nine years on the throne.

Carter found the dagger on Tutankhamun's right thigh in the wrapping of his mummy, according to the authors of the study.

Along with its iron blade, the dagger's fine gold handle "is decorated with cloisonne and granulation work, and ends with a pommel of rock crystal," they said.

The findings match a 2013 scan of a 5,000-year-old cemetery in the Lower Egyptian village of El-Gerzeh which showed the earliest iron artefacts ever found were made from a meteorite, according to a paper published May 20 in the Meteoritics & Planetary Science journal.

As a result, "we suggest that ancient Egyptians attributed great value to meteoritic iron for the production of fine ornamental or ceremonial objects," said the scientists behind the latest study.

The dagger's quality "suggests a significant mastery of ironworking in Tutankhamun's time," said the study.

In addition, a new term used in the 19th dynasty, one dynasty following Akhenaten's, translated literally as "iron of the sky," and was used to describe "all types of iron," according to the study.

"The introduction of the new composite term suggests that the ancient Egyptians... were aware that these rare chunks of iron fell from the sky," said the authors of the study.

Mahmoud el-Halwagy, a former director of the Egyptian Museum who took part in the study, said he was unable to confirm whether ancient Egyptians clearly knew that this iron came from a meteor.

"We don't want to go to other angles, to symbolic or religious issues. These were rocks that were available and were used by humans," said Halwagy.

"Whether they had symbolic or religious uses, this is not unlikely. He was a king and royalty held a high status."

Other iron ancient artefacts in other parts of the world have been identified scientifically to be of meteoritic origin, the scientists said.

These included iron tools made by Inuits in Greenland, the ancient "Iron Man" Buddhist sculpture, and two funerary bracelets and an axe excavated in two different Polish archaeological sites.