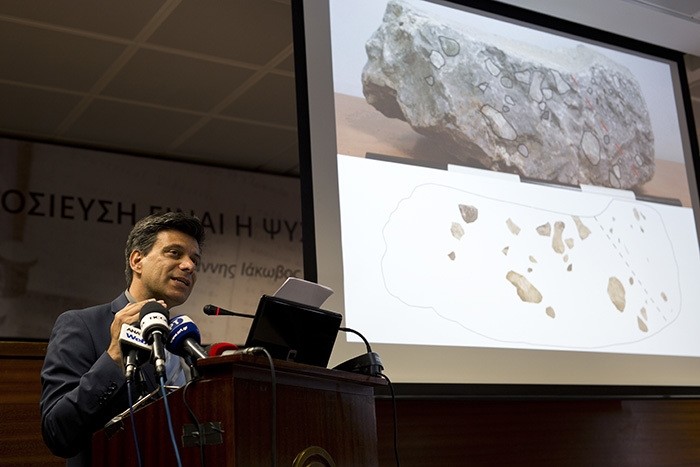 Greek archaeologist Christofilis Maggidis speaks as a photograph of a stone he believes belonged to the lost royal throne in the ancient palace of Mycenae, in Athens, on Tuesday, June 14, 2016. (AP Photo)
by Associated Press Jun 14, 2016 12:00 am

A Greek archaeologist believes he has found a fragment of the lost throne of the rulers of Mycenae, famous from ancient myth and the story of the Trojan War.

Christofilis Maggidis, who heads excavations at the site in southern Greece, says the chunk of worked limestone was found two years ago, in a streambed under the imposing citadel.

He told a press conference in Athens Tuesday that the throne was among sections of the hilltop palace that collapsed during an earthquake around 1200 B.C.

Greek Culture Ministry officials have distanced themselves from the identification, citing a separate study that ruled the chunk to be part of a stone basin.

No other thrones have been found in mainland Greece's Mycenaean palaces. An older, smaller example was found on Knossos, Crete.