An eventful century for Istanbul 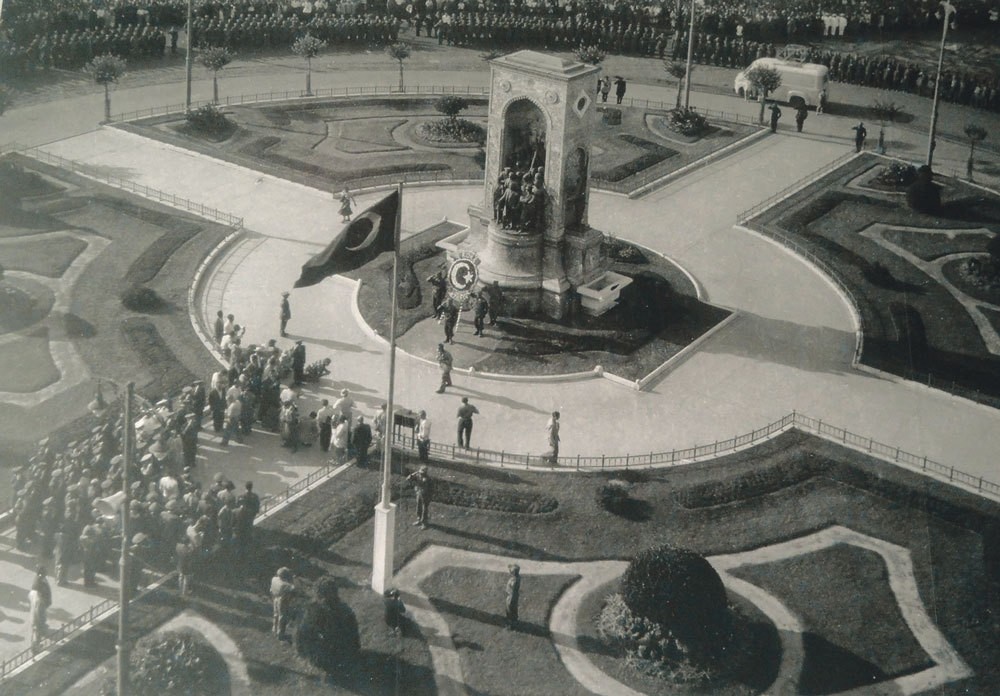 Istanbul is a historically rich city that has seen military attacks, blackouts and coups, especially in the last century. Culture Inc. has collected Istanbul's military and political turning points in a photobook

The Istanbul Metropolitan Municipality's Culture Inc. has collected the most important events from the last 100 years of Istanbul's history as the city has gone through the most active period owing to the numerous changes it experienced in the 20th century.

Ali Satan has written a book that depicts the memorable and sometimes unnoticed events of the last century of the city, from 1911 to 2010, during which time Istanbul became a culture capital. Satan is an academician renowned for his scientific studies and publications on the Republican Era.

The book, "100 Years of Istanbul," includes accounts of many important events, from the great battle fought to keep the empire alive to the last sword-girding procession, from the first air raid on Istanbul to the great migrations and from the construction of the Bosporus Bridge, which was delayed due to a coup, to the opening of the metro line.

The book also presents the changes the city went through in accordance with the policies of the Republican regime, particularly the internal migration that took place after the 1950s and the problems that it brought as well as the political events in the 1970s and the big changes after 1980, from economy to daily life, along with their interesting details.

Centered around various factors, the book serves as an unparalleled reference for those who want to learn about the recent history of the city, from the story of Taksim Military Barracks, whose reconstruction is currently being discussed, to the Sept. 6-7 events, recalled as a black spot in the history of the city and from institutions such as "The Association to Fight the Disrespectful" that aims to enroot and expand respectfulness in the city to discussions regarding the construction of the Bosporus Bridge.

Here are the main military and political events that occurred in Istanbul and caused terrible problems:

Istanbul has seen many battles and attacks. However, the first air raid on Istanbul came during World War I. We heard the words "blackout" and "anti-aircraft" for the first time.

Allied forces started air raids on Istanbul during the Dardanelles campaign. After the Dardanelles front was closed, British air raids on Istanbul continued from Lemnos, Imbros and Samothrace islands. During the air raid on March 9, the Golden Horn (Haliç) and its surroundings were bombed, and people watched these attacks in the streets. However, the air raid on July 9-10 caused heavy casualties. The Yavuz battle cruiser and Yadigar-ı Millet destroyer were submerged along the İstinye coast. There were also 25 martyrs in the bombing of the Defense Ministry. At the end of the attack, the Istanbul Air Defense Command was established to protect Istanbul. Istanbul understood new concepts such as "blackout", "anti-aircraft,""searchlight" and "air raid alarm."

Istanbul had been de facto occupied since Nov. 13, 1918. The invasion was legalized on March 16, 1919, when Allied forces established "occupation commissariats" working as a parallel government to the Ottoman government in Istanbul.

Istanbul's governance was shared by French, Italian and British forces. In addition to controlling specific locations and important institutions, they established high commissariats. These supervised all decisions by the Ottoman government and did not allow the government to independently make or implement any economic and military decision. The three occupation commissioners were the Allied High Council. Turkish officials were called to council meetings from time to time. The council was interested in every issue, from customs tax to summertime. Istanbul's government was facing a very serious financial crisis, and salaries could only be paid once in three or four months. The current account deficit was TL 25 million at the end of 1920.

World War II broke out in 1939, spread to the Balkans in 1940 and cause the Turkish government to take action. The Cabinet proclaimed martial law in the provinces of Istanbul, Kocaeli and Trakya for a month on Nov. 22, 1940. Blackout rules were made obligatory in these cities, and all streetlights except for those in some squares were turned off, while those lit out of necessity were masked. People were forced to close the curtains of their homes, shops and ferries and paint the headlights of automobiles blue. Even though these measures were lifted on Dec. 11, they came to the fore from time to time. In addition, civil defense practices were started to train the public against the possibility of a bombing or war.

Istanbul was spy-infested during WWII. The former British envoy to Sophia, George William Rendel, survived an assassination attempt at the Pera Palace Hotel during a visit to Istanbul. The bomb that went off at the hotel's grand entrance killed 4 people and injured 21. Since Rendel left his room just before the explosion, he survived. After the investigation, it was learned that the explosion was caused by a bomb case placed among the bags that belonged to the embassy of Bulgaria. The second bomb was defused. Rendel stated that he deemed Bulgaria responsible for the attack.

War conditions affected Turkey though it had remained neutral in the war. One of the memorable events of WW II was the period when bread was rationed in Istanbul as of Jan. 14, 1942. Annually prepared rations included daily tickets. The number of family members and the amount of bread people could get in accordance with their ages were written on them. Tickets not used on the exact day would be invalid the next. Those with bread rations could get their shares from any bakery or distribution spot.

Even though Istanbul had not entered the war, the city suffered from heavy war conditions. In the fall of 1944, partial relaxation signals were seen in city life. The ban on the production of baked goods was lifted on Nov. 1 as the production of cake and bakery goods had been banned in 1942 by law. The blackout measures were completely lifted on Nov. 2.

According to a statement made by the Istanbul Municipality, lights could be turned on as of Nov. 8. On Nov. 3, private cars were allowed to hit the roads. Private motor vehicles had been banned in 1940; later the ban was expanded to cover commercial vehicles too. To save oil, odd-even rationing was implemented during the war years.

The Turkish Armed Forces took over the government in Istanbul on May 27. Istanbul Governor Ethem Yetkiner and Mayor Kemal Aygün were deposed and replaced by General Refik Tulga. On May 29, 150 Democrat Party members were taken into custody in Ankara, brought to Istanbul and later taken to Yassıada. 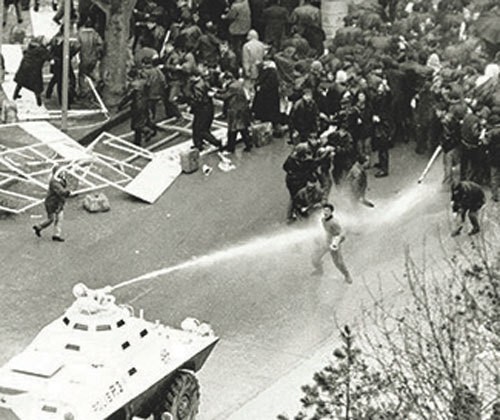 On June 1, 40 people including eight deputies were taken into custody and taken to Davutpaşa Military Barracks. On June 8, thousands of people came together in Taksim and Bayezit squares and organized army-supporting meetings. On June 9, the remains of Turan Emeksiz and Nedim Öztoprak, who had died during student events on April 28-29, were sent to Ankara with a great ceremony. The next day they were buried as "revolution martyrs" on the slopes of Anıtkabir. On June 10, President Bayar and Prime Minister Menderes were brought to Yeşilköy by plane and sent to Yassıada to stand trial. The trials in the Yassıada Court of Justice established on Yassıada started Oct. 14. 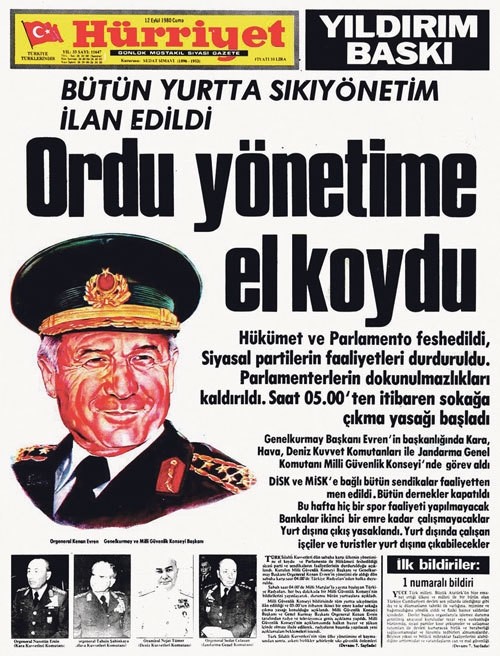 The Sept. 12 administration didn't just unseat the central government on charges of "neutral administration," but also rural organizations, and it swiftly elected new administrators. The National Security Council held municipalities accountable in the first degree for the unity, order and well-being of citizens with Notice No. 3. On Sept. 25, all general councils in the provinces and municipality councils were terminated, and mayors were relieved of their duties. Elected Istanbul Mayor Aytekin Kotil was overthrown and replaced by Commander of War Colleges Lieutenant General İsmail Hakkı Akansel.

As of Sept. 15, a curfew was declared in Istanbul from 12 a.m. to 5 a.m. During curfew hours, those who would come to Istanbul by land were kept waiting in Silivri, Çatalca in Trace, while those coming from the Kocaeli side were held up at the Tuzla, Samandra checkpoints until the curfew ended.

On Sept. 15, Kotil briefed the new mayor, Akansel, about the municipality. Istanbul party leaders and some professional organizations were ordered not to leave home by the Martial Law Command. Hasdal Military Barracks in Gaziosmanpaşa, Alemdağ Barracks in Sarıgazi, Kabakoz Barracks in Beykoz and Selimiye Barracks in Üsküdar were used as temporary prisons.

On Nov. 15, simultaneous suicide attacks hit the Neve Shalom and Beth Israel synagogues during Saturday prayer. During the attacks, 25 people, including the two bombers, were killed. Over 300 people were injured and 110 buildings were damaged. The next day, Israeli Foreign Minister Silvan Shalom made on-site examinations and then Prime Minister Tayyip Erdoğan visited synagogues and extended his condolences to the Jewish community.
Last Update: Aug 01, 2016 1:10 am
RELATED TOPICS