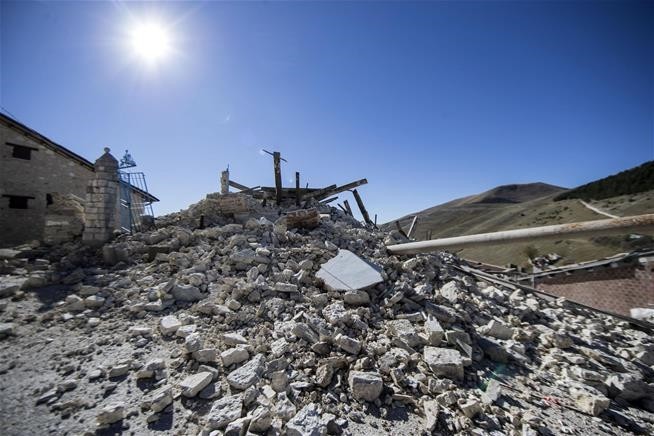 Italian authorities are investigating the theft of a 17th-century painting from an earthquake-damaged church, one of the first suspected victims of looting from last month's quakes that have sent officials racing to recover priceless artworks before thieves and the elements get to them.

The national police unit charged with protecting cultural treasures said Monday that the 1631 painting "Pardon in Assisi" by French painter Jean Lhomme was stolen from a village church in Nottoria. The work was well-known among historians.

The parish priest, the Rev. Marco Rufini, told news agency ANSA that the thieves apparently ignored the risk of the church collapsing on them when they cut the painting from its frame, "adding injury to injury."

The earthquakes on Oct. 26 and Oct. 30 collapsed buildings across a broad swath of a region already reeling from a deadly August quake. One of the iconic images of the devastation is the basilica of St. Benedict of Norcia, built over the birthplace of the patron saint of Europe, where only the facade remains standing.

While the main priorities have been tending to the estimated 30,000 people left homeless, authorities have also begun recovering artworks from the more than 182 quake-damaged or destroyed churches in the area, said the archbishop of Norcia and Spoleto, Monsignor Renato Boccardo.

"These towns have been abandoned, with their churches destroyed, so the risk of theft is very high," he said.

In addition, a powerful storm Sunday night threatened even more damage to artworks exposed to the elements. The mayor of quake-hit Visso, for example, flagged that important frescoes of the Madonna were at risk from the rain and required a helicopter to come in and extract them.

The army has moved in anti-looting units to the region, but Boccardo noted that cities like Norcia and nearby Cascia have around 40 tiny hamlets apiece, sparsely spread across mountains. "Whoever wants to go into a home or church can go easily," he said.

While stressing that his primary concern was providing for his flock, he said the damage to the churches had added to their trauma.

"The history of this area is expressed in its churches, the witnesses of art, history and faith," he told reporters in Rome. For the people of the region, he said, the quake represented a "double loss" of both their homes and their churches.

"All the life of these little hamlets and towns is linked to the churches — the history and development of the towns all took place around them."