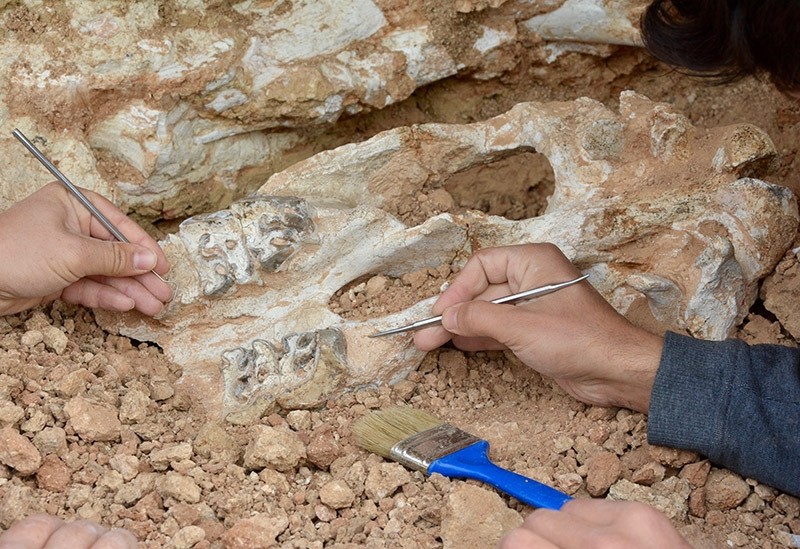 Vertebrate fossils found in the district of Kaman in Kırşehir province in central Turkey two years ago continue to draw the attention of world's leading scientists.

The fossils were found in Kurutlu village, near the Hirfanlı Dam Lake in Kırşehir during surface explorations back in 2011.

Upon the discovery, explorations turned into systematic excavations with a cabinet decision and the support of the Ministry of Culture and Tourism, the Turkish Historical Society and Ahi Evran University.

Assoc. Prof. Dr. Ahmet Cem Erkman, an instructor of the Anthropology department at Ahi Evran University and the team leader of surface exploration, stated that giraffe, rhinoceros, primate, hyena, horse, elephant and rodent fossils dating back to 7-11 million years which coincides to the upper Miocene period were found during excavations at Lodalı hill.

A closer examination of these fossils showed that the region had a similar ecological environment similar to Africa in the past.

"Anatolia has an important place in natural history. Animal migration was quite common in this region. Scientific research on animals carried out in this region will reveal the fauna, pale-biodiversity and chronology. According to data, we can say that this region had an opening to a big stream, the fossils were most probably dragged along during a flood", Erkman added.

The project has lasted for three years, with 2 months of excavation and 10 months of laboratory research each year. The fossils are currently being scientifically examined in three modern laboratories at Ahi Evran University. Elephant, rhinoceros and giraffe bones will soon be displayed at new museums to be opened in Cappadocia and Kırşehir, and at Kaman Kalehöyük Archeological Museum.