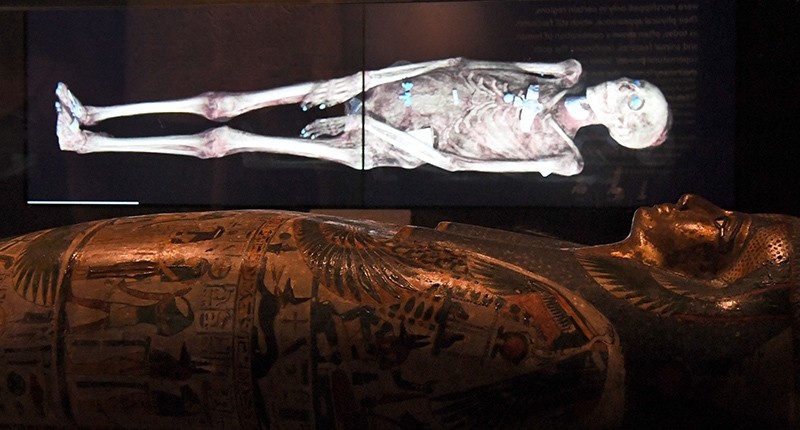 A three-dimensional image of a CT scan of an Egyptian mummy is projected above a sarcophagus (AFP Photo)
by Dec 08, 2016 12:00 am

The hidden secrets of Egyptian mummies up to 3,000 years old have been virtually unwrapped and reconstructed for the first time using cutting-edge scanning technology in a joint British-Australian exhibition.

Three-dimensional images of six mummies aged between 900BC and 140-180AD from ancient Egypt, which have been held at the British Museum but never physically unwrapped, give an insight into what it was like to live along the Nile river thousands of years ago.

"We are revealing details of all their physical remains as well as the embalming material used by the embalmers like never before," the British Museum's physical anthropology curator Daniel Antoine told AFP at the Powerhouse Museum in Sydney Thursday.

"What we are showing to the public is brand-new discoveries of their insides."

Two of the travelling mummies were previously exhibited at the British Museum in 2014, with the other four being revealed to the world for the first time in the Sydney show that opens on Saturday.

A dual-energy computed tomography (CT) scanner at the Royal Brompton Hospital in London -- of which only a handful are in operation around the world -- was used to obtain thousands of slices of images of the mummies, with volumetric software then harnessed to create 3D models, Antoine said.

It effectively allows visitors to virtually peel back the layers of history through interactive 3D visualisations of the CT scans.

"I've been able to image the arteries of the mummies, the ones that have been left, and I'm able to look at whether they are suffering from diseases which many people are suffering from today, (such as) cardiovascular diseases," Antoine added.

He believes the mummies can be rescanned in a decade's time using the latest technology to find out more about their state of health, what diseases they were suffering from and the nature of their deaths.

"We hope in the future to image the soft tissues at the cellular level to look at whether there's any changes or to find evidence, for example, of cardiovascular diseases but also things like cancer."

The scans found that one of mummies, Tamut, a priest's daughter from about 900BC, had plaque in her arteries. Three-dimensional printing was also used to recreate amulets found during scans of her mummified remains.

The earliest evidence of mummification in Egypt suggests that the practice of wrapping bodies to preserve them after death dates back as far as 4500BC.

The mummies are due to travel to Asia next year.