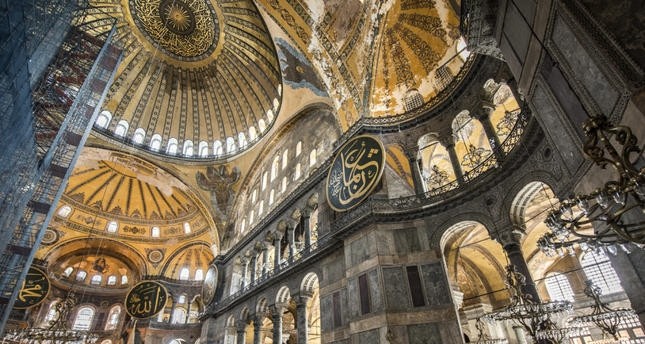 by Daily Sabah Jan 02, 2017 12:00 am
An impressive figure of the architectural beauty hailing from the Byzantine-era, the Hagia Sophia at Istanbul's Sultanahmet Square is still inspiring new studies, like the "Icons of Sound" project from Stanford University.

Having served as a cathedral, the mosque and now a museum over its 1,500-year-long lifespan, the Hagia Sophia is now the subject of a study from Stanford's Center for Computer Research in Music and Acoustics (CCRMA) and its art history department.

The team applies a method by using balloon pops that identify the space's acoustic parameters, allowing them to introduce a computer model. This brings the experience that makes it seem as if listeners were in the Hagia Sophia. For the study, the research team has collaborated with chamber choir Cappella Romana, which has performed Early Music including Byzantine, Slavonic, and Gregorian chants by applying the computational model. The choir has already given a series of concert performances and continues to make listeners feel as if they were in the Hagia Sophia.

Built in the sixth century, the Hagia Sophia, which means "Holy Wisdom" in Greek, was converted to a mosque in 1453 when the Ottomans conquered Istanbul, in what was then called Constantinople. In 1935 it was transformed into a museum. The masterpiece features an immense dome supported by huge pillars,its walls sheathed with marble and decorated with mosaics.
RELATED TOPICS