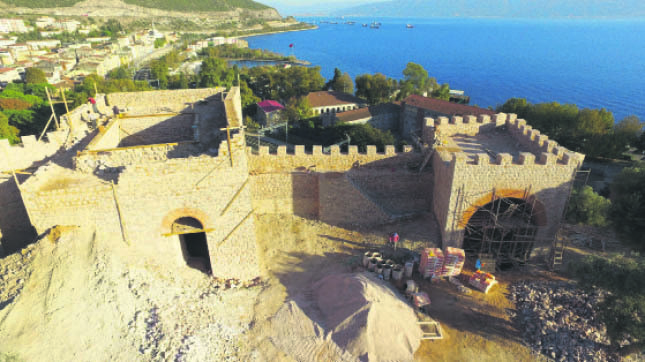 by Jan 02, 2017 12:00 am
Hereke Castle in Kocaeli, in northwest Anatolia near Istanbul, built in the Eastern Roman Empire and then abandoned, is being restored by Körfez Municipality.

Körfez Municipality Mayor İsmail Baran noted that they were striving to unearth and bring historical values to light. Estimated to have been built around A.D. 640, during the Eastern Roman Empire era, the castle was abandoned until today. Baran, who has initiated various projects designed to revive the historical corridor of the Gulf region, noted that the first stage of work has commenced on the 1,400-year-old castle, which was also mentioned in the travel log of the famous Turkish traveler Evliya Çelebi, and the second stage is to start soon. Körfez Municipality's mayor also opened various other historical buildings in the district to tourism and the public. "Hereke Castle is a 1,400-year-old building, but is almost completely destroyed. We want to revive our history, thus started restoration works for the castle. We're going stage by stage. We will offer all the historical buildings and sites in the Gulf district to the public," Baran said.

Once Hereke castle is restored and open for tourism, along with the Kaiser Wilhelm Pavilion, Kutluca Telegraph Office and the Tütünçiftlik Railway Station, it will become a part of a corridor of history. The restoration works for Hereke Castle also earned the municipality an award. Körfez Municipality's award in the Motivating Historical and Cultural Heritage Protection Projects and Practices competition organized at Antalya EXPO Center, was received by Mayor Baran.
RELATED TOPICS